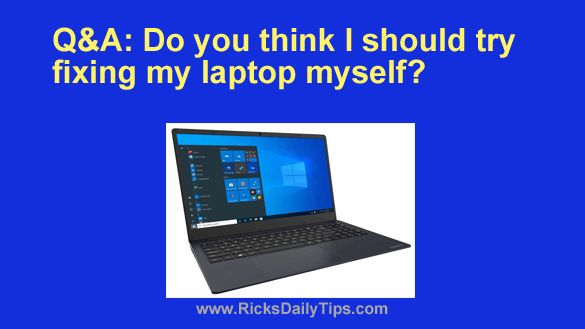 Question from Andrew:  I have a Toshiba Dynabook Satellite Pro C50-H laptop that I bought new just 3 months ago, and it already has a problem.

When I turn the laptop on I can smell a faint burning smell and see faint whiffs of smoke coming out of the keyboard.

The thing is it boots up normally and works fine and no part of the laptop seems to get hotter than it should (to the touch at least).

My question is do you think this might be something I can fix myself or do you recommend that I just go ahead and send it back?  END_OF_DOCUMENT_TOKEN_TO_BE_REPLACED

Question from Ron:  My Toshiba laptop seems to have an intermittent short in the motherboard power connector.

Most of the time it acts like the AC adapter isn’t even plugged in, but if you wiggle the connector a certain way it will sometimes start charging the battery and the screen will get brighter.

I know the problem isn’t a bad AC adapter because it does the same thing with my wife’s adapter plugged in (we have identical laptops).

This laptop is only 14 months old (2 months out of warranty) but I don’t want to spend almost as much as I could buy a new one for to get it fixed. I’m afraid it might need a new motherboard, but I’m hoping it’s something a lot simpler and cheaper.

Do you think this can be fixed without laying out too much cash?

Question from Christine M.: Hi Rick. I love your tips!! You have helped me out so much over the last 2 months!

Now I need help with my dad’s laptop. It’s a Toshiba Satellite M505-s4940. He just upgraded it to Windows 8 (big mistake IMO) and now his wireless adapter isn’t working.

When he installed Windows 8 it said it couldn’t find a driver for the wireless adapter and it has a yellow exclamation point over it in Device Manager. I downloaded several drivers from the Toshiba website and none of the worked. Can you possibly help me track down a working driver? Dad and I would be eternally grateful! Thanks in advance!

Question from Edward K.:  The Windows installation on my Toshiba Satellite C660-195 laptop is trashed thanks to a major virus infestation.

I believe the only way to fix it is to restore everything back to the way it was when it left the factory, but I can’t figure out how to do that since it didn’t come with a restore disc.

I’m pretty sure there’s a recovery partition on the hard drive, but I have no clue how to access it. I can’t see it in Windows Explorer and I can’t find any info on the Toshiba website. Can you tell me how to restore this laptop back to the factory defaults? Thanks! 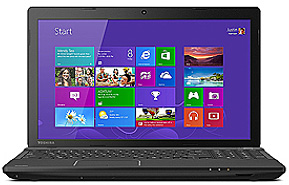 Question from Mark V.:  I bought a brand new Toshiba Satellite C55-A laptop from Best Buy a couple of months ago, then had to go out of town on business for 6 weeks before I could even open the box and try it out.

When I got back home I hooked it up and found out that the Wi-Fi connection is really SLOW!!! I know it’s not a weak signal from the router because both my 5 year old HP laptop and my iPad 4 get great wireless speeds in every part of the house.

I’ve tried everything I can think of, including resetting Windows 8 to the factory default. No luck!! Any ideas? Neither Toshiba nor Best Buy were any help at all since I had to wait so long to try it out!