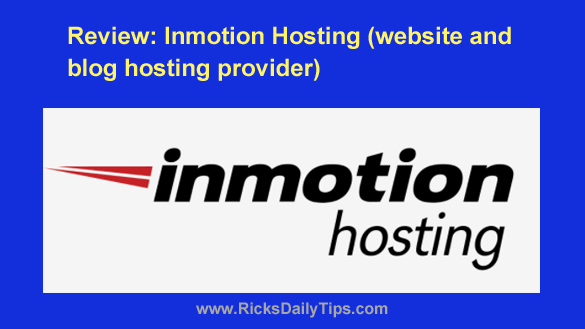 In the spirit of full transparency, let me state up-front that I’m a long-time customer of InMotion Hosting, for reasons that will be clear to you after reading this review.

I have used several web hosting companies over the years, with various levels of satisfaction.

This review is basically a contrast between the products, service and support I received from those other companies and what I’ve received from InMotion.

Several years ago I moved Rick’s Daily Tips and a couple of my other blogs from another hosting company to InMotion Hosting, and I’ve been very pleased with the results.

I had been with my previous web host for some time, and for most of that time I was pretty happy with the service I received from them.

The thing was, the Virtual Private Server (VPS) my blogs were hosted on was very expensive.

And to make matters even worse, my blog’s page load times slowed considerably during that last year due to a steady increase in traffic, even as my monthly hosting fee kept rising.

I spent several months researching dozens of web hosting companies, searching for one that offered the same level of service but with faster servers at a lower price.

When all the dust had settled I chose to go with InMotion.

The VPS hosting plan I signed up for only cost about 1/2 of what I was paying previously, but in spite of the very competitive cost the service and support I’ve received from the folks at Inmotion is the best I have ever received from any hosting company.

All of that being said, the best thing about the move is my blogs instantly started performing way better than they did on the old server – at roughly 1/2 the cost!

The techs at Inmotion helped me move the site from the old server onto the new one.

Well, I should say I used the “Transfer Tool” in the WHM Control Panel but InMotion’s Tech Support team assisted me just to make sure everything went smoothly.

Note: InMotion’s techs will gladly move your site for you (at no cost in most cases) if you request it. You won’t have to lift a finger. Just initiate a Website Transfer Request via your Account Management Panel (AMP) and they’ll get it done.

ImMotion’s servers are super-fast because they host your site(s) on a solid state drive (SSD) instead of a much slower spinning hard drive. This alone is a huge improvement over many other web hosting companies.

Most major web hosting companies offer a variety of hosting plans and services to meet the needs of their customers, and InMotion is no exception.

Depending on your needs and budget, you can choose from the following plans:

A shared hosting plan can be a good option if you only have one website and you don’t mind sharing server storage space and resources with other websites that belong to other customers.

The primary advantage of shared hosting is it’s low cost. You can host a website on a shared server at Inmotion for around a hundred bucks a year.

The primary downside of using a shared hosting plan is slower page loading times due to your site having to share the server’s CPU clock cycles, RAM and bandwidth with multiple other websites.

While using a shared server is simply not an option for Rick’s Daily Tips, it could well be all you need for your website or blog, depending on the amount of traffic the site receives.

If you do end up opting for shared hosting, I honestly don’t believe you’ll find a better plan or better service than what you’ll receive from InMotion Hosting.

If you have a blog or website that’s built on the awesome WordPress platform (or if you plan to start one), one of the popular WordPress Hosting plans offered by InMotion would be an excellent choice.

Managed WordPress Hosting plans offer several advantages over other types of hosting options for blogs and websites that are based on WordPress.

For the sake of brevity, I won’t go into all of those advantages here because they are all explained quite well on the page I linked to above.

I’ll simply say a WordPress Hosting plan will allow you to get your existing WordPress blog or website up and running at InMotion very quickly. And if you plan to start a new WordPress site from scratch you’ll find that WordPress is already installed for you and ready to go!

Once your WordPress site is up and running you won’t need to spend a bunch of time worrying about security or updates because those things are handled by InMotion. That means you can spend your valuable time concentrating on creating content and building value into your site for its visitors.

When compared to a regular Shared Hosting plan, there is really no disadvantage to opting for WordPress Hosting instead.

A Virtual Private Server (VPS) gives you almost all the advantages of a private server (which we’ll get to a little later) at a lower monthly cost.

Although the sites hosted on a VPS are sharing a server with other websites, your sites are running completely independent of all the other sites on the server.

In a nutshell, your sites are guaranteed the use of all the RAM, the number of CPU cores and the amount of storage space and bandwidth that’s allotted to them under the terms of your selected VPS plan.

That means even if some of the sites owned by a different customer are running poorly and maxing out the resources allotted to that customer, your sites will be completely unaffected. They’ll hum right along as the same speed and performance level they always enjoy.

As I mentioned at the outset, I use an Inmotion Hosting VPS to host this blog (along with a couple of others), and InMotion’s VPS servers are so good my blogs run perfectly and load quickly even with their high traffic levels.

There might come a time when I’ll need to move up to Dedicated Hosting (which would be a good thing since that would mean my blogs’ already high traffic numbers had increased even more), right now my InMotion VPS is handling the load with ease.

For what it’s worth, I’ve hosted blogs on VPS servers from several other companies in the past, and I honestly don’t believe any of those other servers could handle my blog’s current traffic with the same speed and stability I receive with my InMotion VPS.

As it’s name implies, a Dedicated Server assigns ALL of the server’s RAM, CPU cores, file storage and bandwidth to your sites, and your sites alone. Nothing whatsoever is shared with any other customer’s sites.

The advantage here is obvious: The sites that are hosted on a dedicated server will be as fast and responsive as they can possibly be given the server’s hardware and software configuration.

Once again, in the spirit of full disclosure, I have to say that I have never used a dedicated server provided by InMotion Hosting so I can’t offer an opinion about their capabilities compared to other companies’ dedicated hosting.

But I can say this…

I have used dedicated servers provided by other hosting companies in the past, and I have to say I was pleased with their speed and responsiveness.

I’ll let you do the math on that one.

Based upon the quality of their other services I have no doubt that Inmotion Hosting’s Dedicated Hosting is at least as good (and probably better) than those other companies, and probably at a lower price.

My experience with Inmotion Hosting’s Customer Service and Tech Support…

I have only had to use InMotion’s Customer Service maybe three or four times in the years since I started using their services. Each of those issues revolved around a problem I had with a credit card or some other billing-related issue.

In every instance my issue was handled quickly and professionally, and always to my satisfaction.

Some of those support requests were in regards to service and equipment upgrades that I wanted to make at the time.

Others were simply to ask a technical question about my server or one of my blogs (and even about WordPress).

The rest were to fix technical issues, most of which were caused by something I did on my end that ended up breaking something.

Each and every time my issue was handled quickly and professionally by a friendly tech who never made me feel like a dolt – even when the issue was caused by my being a dolt.

I’ve generally had good experiences with most of the support personnel from the hosting companies I’ve dealt with in the past, but the level of service and support I’ve enjoyed from InMotion’s pros has truly been a cut above.

As you can surely tell by now, I’m a major fan of InMotion Hosting. That’s why I’m still using them to host my most important blogs after all this time.

If you’re looking for a hosting company to host a new website or blog you’re planning to build or to move an existing site to, I believe you’ll be hard-pressed to find a better deal, better service or better products than the ones provided by InMotion Hosting.