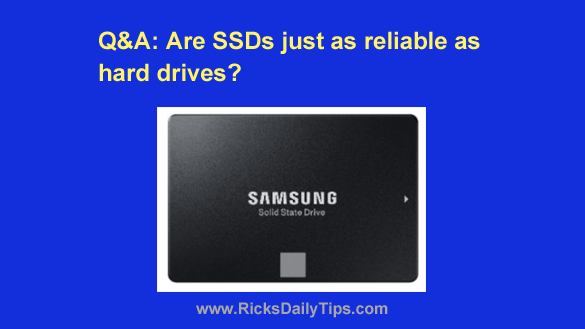 I recently read your post about speeding up a computer by replacing the hard drive with a much faster solid state drive (SSD).

I’m leaning towards doing this but I have one concern that’s holding me back.

I’m worried that an SSD might not be as reliable as a hard drive, and I really can’t afford to lose my files if it were to crash on me.

What’s your opinion on this? Are SSDs as reliable as hard drives?

Rick’s answer:  That’s a great question Wesley, and the answer just might surprise you.

As with any new technology, there were a few wrinkles to iron out when the first solid state drives began to hit the market.

Some of those pioneering SSDs were indeed buggy and unreliable, and they were also super-expensive. Therefore not many of them were sold.

But, as they say, times have changed.

Modern SSDs are now extremely reliable, for the following reasons:

1 – Virtually all of the bugs that afflicted the earliest SSDs have been squashed.

2 – Unlike spinning hard drives, solid state drives have no moving parts to wear out.

4 – Unlike with a traditional hard drive, there are no read/write heads to crash into a spinning platter and destroy the drive.

Now that we have advantages of using an SSD out of the way, I must mention one thing that can reduce the useful life of an SSD.

The memory cells in a solid state drive can only be written to a finite number of times. Therefore, over time cells that are repeatedly erased and written to with new information will stop working as they should.

But that being said, this is a non-issue for the vast majority of users because most modern computer operating systems are quite good at managing the use of an SSD’s memory cells in order to prevent their over-use.

Chances are any quality SSD you install will last just as long (and perhaps even longer) than a hard drive would last in the same computer and under the same usage conditions.

Truth be told, modern solid state drives are now at least as reliable as the hard drives they are beginning to replace in the marketplace.

What’s more, the prices of SSDs have dropped to the point where they’re very affordable unless you need one with a massive amount of storage space. But that will soon change as advances in technology make really large SSDs less expensive to manufacture than they are today.

Bottom line: In my humble opinion, you can safely replace your computer’s hard drive with an SSD without having to worry about it being less reliable than the hard drive it replaced.

Just be aware that while SSDs are extremely reliable these days, they can and do fail on occasion. That’s why you’ll still need to back up your data on a regular basis.

These posts explain how to create System Image Backups on a Windows machine. This post explains how to back up a Mac using the Time Machine utility.