You are here: Home / Tech Questions & Answers / Q&A: Why do Windows PCs slow down over time?
1.9k
SHARES
ShareTweetSubscribe 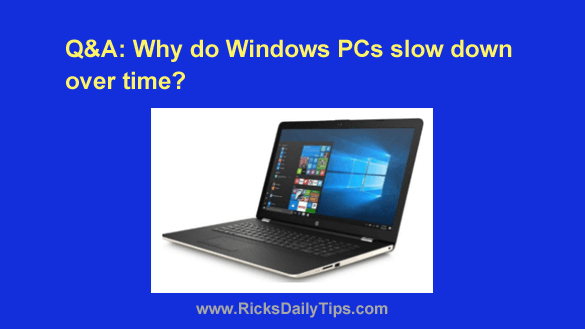 Question from Michael:  I’ve noticed that every computer I’ve ever owned runs lightning fast when I first take it out of the box.

But before long they always seem to start slowing down.

Why do they do that? Do the parts just wear out or what?

Is there anything that can be done to reverse the slowdown and get the PC running like new again?

Rick’s answer:  Michael, the gradual decrease in apparent speed of a Windows computer usually has nothing to do with the hardware inside the case.

Well, a failing hard drive can cause delays while the read/write heads are trying to access the data on the drive, but that isn’t usually the case in the context of your question.

Windows PC’s slow down over time for a number of reasons, virtually all of which are software related. Here are a few of the most common culprits:

1 – The hard drive gets clogged up with tons of digital “clutter”, much of which is spread all over the drive in fragments instead of in nice, contiguous blocks.

This make the drive have to work overtime to find the data that it’s looking for.

3 – Over time your system accumulates a number of auto-starting programs that automatically load into memory every time Windows starts up.

Every one of those programs that are running in the background uses a portion of the CPU’s clock cycles, and that includes the programs that you don’t even use that often.

And unfortunately, the more malware you have on a system, the slower it gets.

All you need to do is defragment your PC’s hard drive about once every three months.

Recent versions of Windows automatically defragment the hard drive at regular intervals, but I’ve found it helps to do it manually on occasion using either Windows’ native Defrag utility.

Important: If your PC has a solid state drive (SSD) instead of a spinning hard drive you won’t need to defragment the drive, ever.

In fact, doing so could result in the SSD wearing out and failing prematurely.

There really isn’t a lot you can do about reason number two. Some folks recommend running a Registry Optimizer utility, but I don’t. I’ve seen too many Windows installations trashed by monkeying around with the Registry.

One thing I do recommend is backing up your hard drive or SSD and then reinstalling Windows fresh about once a year.

A fresh Windows installation will get your PC back into peak running condition, and once you restore your files you’ll be back up and running as smooth as ever.

Note: Both Windows 10 and Windows 11 make it easy to “refresh/reset” your Windows installation (which is basically the same thing as a clean install).

In regards to number three, you can use a fantastic free tool called Autoruns to reduce the number of programs that load into memory every time Windows starts up.

And that brings us to the malware situation…

If you even suspect that malware might be on your PC you need to take steps to get it off of there right away.

If you need help with this, I have a written a detailed post explaining how to remove every bit of malware from a Windows machine.

And now, one final recommendation…

Make frequent backups of your hard drive just in case it does decide to go belly up on you. And trust me, at some point it will if you use your computer long enough.

Failing hard drives often give subtle hints about their impending failure, but not always. Always having a recent backup on hand ensures that your precious files won’t kick the bucket right along with the drive.

The easiest way to back the hard drive on a Windows PC is to create a System Image Backup.