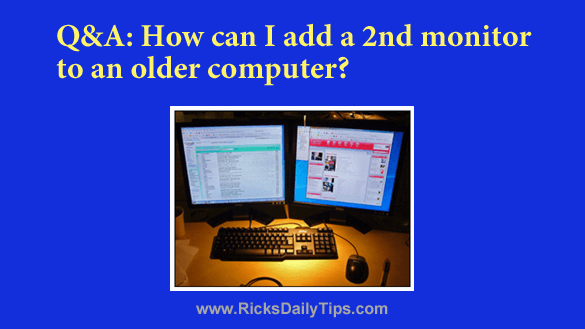 Question from Mickey W.:  Hi Rick. I have an older Acer desktop computer that’s been updated to Windows 10.

I want to add a 2nd screen to that PC just to display my Gmail, but the problem is it has just one video output port.

Can I buy something like a splitter that’ll let me hook up two monitors to one video port? END_OF_DOCUMENT_TOKEN_TO_BE_REPLACED

Question from Telsi P.:  I have a 5 year old gaming computer that came with a fairly weak video card.

About three years ago I replaced that original GPU with a MSI R9 390 GAMING 8G Graphics Card and it worked great until yesterday when it burned out on me.

And I do really mean BURNED OUT!!

This computer’s case has a see-through side panel and I literally saw the video card shooting flames.

I quickly unplugged the computer and removed the video card. One small section of the card was almost completely destroyed but there’s no damage that I can find anywhere on the motherboard.

The computer starts up fine and runs perfectly using the motherboard’s integrated video. My question is can I just replace the bad video card and everything will be ok?

I’m not all that concerned about the computer itself because I’m planning to replace it fairly soon anyway but I’d hate to burn out an expensive new video card by plugging it into a bad GPU slot. 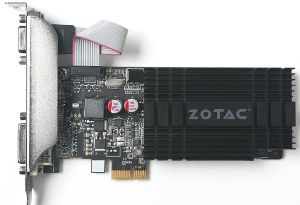 Question from Myron B.:  I have a 4 year old Dell Inspiron desktop PC with Windows 8.1 that started giving me a problem a couple of days ago.

Now when I turn on the computer it will run fine for a few minutes and then the screen will go black and say “No Signal”. A few seconds after that it blanks out completely.

I thought maybe the power settings had got changed somehow but I double-checked and nothing is set to cause the display to turn off or to make the computer to go to sleep.

I don’t think the computer is going to sleep because all the lights stay on and the hard drive keeps doing stuff long after the monitor has shut off.

I know it’s not a bad monitor because it does the same thing with two other monitors that I tried. And it can’t be the video card because it doesn’t have one.

I’m at a loss as to what the problem could be. Do you have any idea what could be causing this?

I really can’t afford a new computer right now and I can’t afford to spend a lot of money to fix this one either if I can avoid it.

Question from Glen J.:  I have what is probably a very odd request. I need a low powered video card that doesn’t use a fan.

The video card in my PC has always been very noisy, and now the fan has started making screeching noises and the blades are wobbly (bad bearings perhaps?).

My question is can I buy a simple low powered, fanless video card that will work in a PCIe slot? I don’t need anything fancy, just something to drive my 21″ LCD monitor. I wouldn’t even replace the bad card at all were it not for the fact that my motherboard doesn’t have integrated video.

Any help you can provide will be very appreciated. END_OF_DOCUMENT_TOKEN_TO_BE_REPLACED

Question from Trevor F.:  Hi Rick. I have an HP G72-259WM laptop that’s really slow when playing most games. The screen will freeze and jump at random times. It’s really frustrating try to use this computer for anything related to gaming.

I’ve already had the RAM maxed out, and now I’m wanting to upgrade the video card. Is the video card replaceable in this computer?