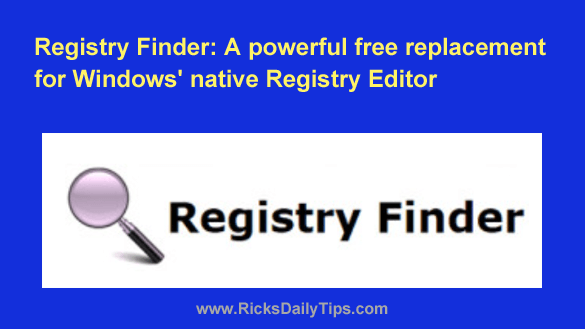 Many of the tips I post on this blog involve making changes to the Windows Registry.

The problem is, Windows’ native Regedit Registry Editor can be a real pain to use.

One of my biggest pet peeves with Regedit has always been the way we have to navigate several layers deep into the registry tree using the mouse.

But thanks to a fantastic free utility called Registry Finder, you no longer have to.  END_OF_DOCUMENT_TOKEN_TO_BE_REPLACED 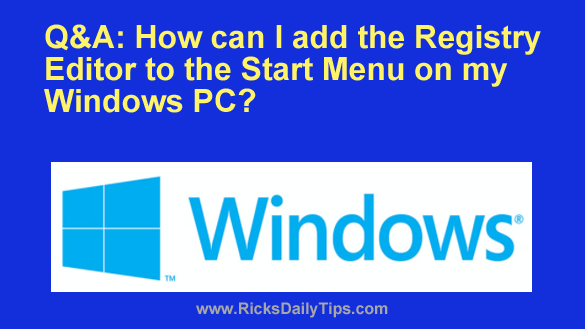 Question from Kyle:  When my computer was running Windows 7 I had an icon for the Registry Editor (Regedit) on my Start Menu.

But after I updated my computer to Windows 10 I noticed that it’s no longer there.

Can you tell me how to get it back?  END_OF_DOCUMENT_TOKEN_TO_BE_REPLACED

Question from Emil P.:  Ever since I updated my computer to Windows 10 it’s been hanging up at shutdown.

It displays a window saying that the system is closing X number of apps and shutting down.

But then it says that an app is preventing Windows from shutting down and asks if I want to shut down anyway or click cancel.

This is a screenshot of one of these messages:  END_OF_DOCUMENT_TOKEN_TO_BE_REPLACED

If your PC was either purchased used or “inherited” as a hand-me-down system, you probably keep seeing the previous owner’s name pop up from time to time as the “Registered Owner”. And I’m guessing that you probably find that a bit irritating.

It’s actually pretty easy to change the Registered Owner setting in the Windows Registry. But before I show you how to do that, it is incumbent upon me to tell you the following…  END_OF_DOCUMENT_TOKEN_TO_BE_REPLACED