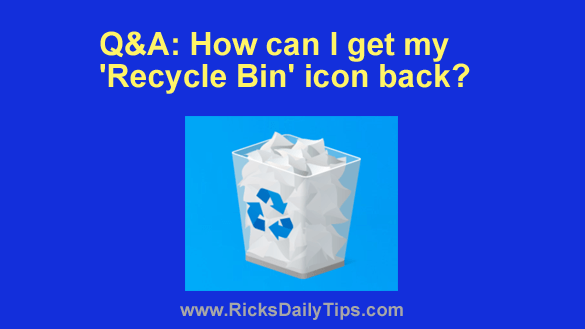 Question from Uneva:  I have somehow deleted the icon for the Recycle Bin from my desktop. How can I get it back?

My computer is an HP All-In-One with Windows on it.

Thanks for your help in advance. I really appreciate it. 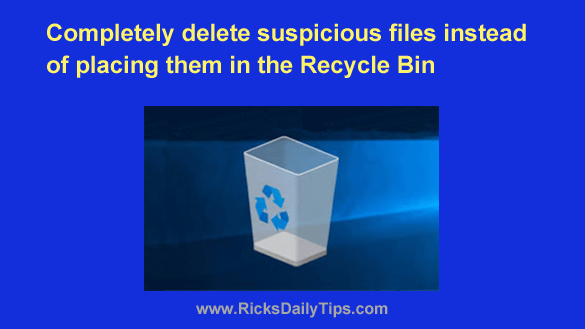 If you’ve been using Microsoft Windows for a while you probably know that deleting a file doesn’t really remove it from the system.

Instead, it’s actually moved to a special folder called the Recycle Bin.

That’s generally a good thing because we all occasionally delete a file by mistake or wish we hadn’t deleted a file at some later point in time.

Having our deleted files go into the Recycle Bin makes it easy to restore one of them to it’s original folder in either of the above-mentioned cases.

But unfortunately some files can become problematic if we allow them to sit idly in the Recycle Bin.

END_OF_DOCUMENT_TOKEN_TO_BE_REPLACED 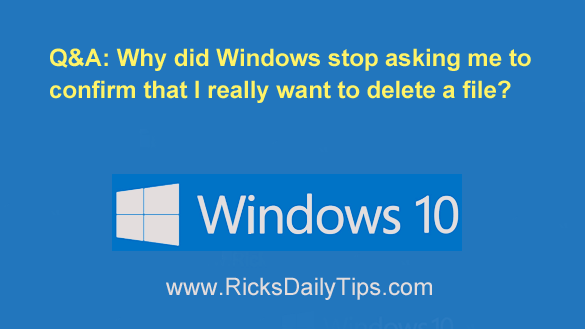 Question from Francine J.:  I have a computer with Windows 10 on it.

It used to be that when I tried to delete a file a message would pop up asking if I really wanted to delete it, but not anymore.

Now the file is just deleted immediately with no chance to change my mind.

I really need those confirmation messages because I’ve caught myself trying to delete the wrong file several times in the past.

Can you tell me how to get Windows to start asking me to confirm file deletions again?

Question from Matthew T.:  I have a Dell laptop that I upgraded from Windows 7 to Windows 10.

Before the upgrade, whenever I would delete a file it went into the “Recycle Bin” where I could recover it later if I wanted to.

But now under Windows 10, all the files that I delete are gone forever and nothing ever gets placed into the Recycle Bin.

How can I fix this? Thanks.