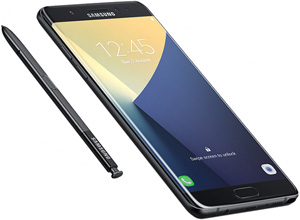 As I mentioned in this post, Samsung has stopped making their ill-fated Galaxy Note 7 smart phones and issued a recall for all of the units that have already been sold.

According to the company, about 93% of all the Galaxy Note 7 devices that were sold have already been returned under the recall, and now Samsung is planning to use a special form of “tough-love” to spur the return of the remaining phones.

To that end, Samsung will be releasing an update on December 19 that will prevent the Galaxy Note 7’s battery from being recharged and cut off all access to cellular and Internet connections. In short, the phones will be effectively “bricked” on that date.  END_OF_DOCUMENT_TOKEN_TO_BE_REPLACED

Korean electronics giant Samsung has decided to stop making their new Galaxy Note 7 smartphones for good and recall ALL of the phones that are currently in use – even the replacement phones from the original recall.

As you probably know, the high-end Galaxy Note 7 got off to a very rocky start when some of the phones began over-heating and catching fire almost immediately after the new phone hit the market.

Samsung quickly recalled all of the phones that had been sold to date and provided free replacements for them, but then the replacement phones started over-heating as well.  END_OF_DOCUMENT_TOKEN_TO_BE_REPLACED

As I mentioned in this post, Samsung issued a world-wide recall a couple of weeks ago for all Galaxy Note 7 smartphones that have been sold to date due to a dangerous battery issue.

Since then they have been able to determine which specific phones have the defective batteries, and they have modified the recall to cover only the affected devices.

If you own a Galaxy Note 7 you can now easily check to see if your phone still falls under the recall notice. You can choose either of two methods for checking your phone’s recall status:  END_OF_DOCUMENT_TOKEN_TO_BE_REPLACED

Have you taken the plunge and purchased one of the new Samsung Galaxy Note 7 smart phones that recently hit the market?

If so, it has just been recalled due to what has been described as a very serious battery issue.

Apparently the defective batteries are subject to overheating, and some of them have actually exploded and caught on fire. Not a good thing to say the least!

If you or someone you know owns a Panasonic Toughbook CF-S 10 laptop, the company might have just recalled its battery pack.

Apparently the defective batteries were contaminated with flammable materials during the manufacturing process, resulting in a potential fire hazard.  END_OF_DOCUMENT_TOKEN_TO_BE_REPLACED