You are here: Home / Tech Questions & Answers / Q&A: Will an SSD go bad if it’s not used for a long time?
1.3k
SHARES
ShareTweetSubscribe 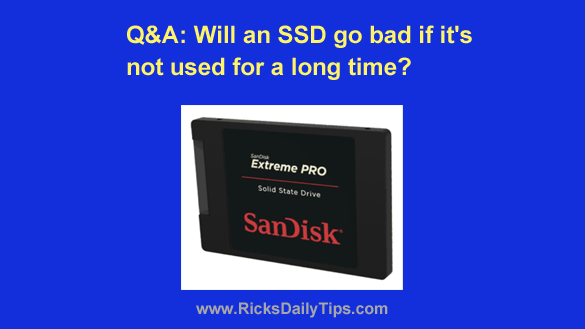 Question from Glen E.:  A while back I read your post about replacing a computer’s hard drive with an SSD and it sounded like a pretty good idea.

I finally ended up buying a 480GB SSD to replace the 250GB hard drive in my old Acer laptop, but the laptop’s screen went bad before I had a chance to make the switch.

I really didn’t want to spend a lot of money to have the Acer fixed so I just replaced it with a new Dell laptop.

The new Dell has a 1TB hard drive so I don’t really need the SSD. Can I put the SSD on a shelf and keep it for a backup in case the hard drive ever fails, or will it go bad after a while if I don’t use it?

Rick’s answer:  Glen, you can safely store your new SSD and keep it as a backup for your hard drive if you wish. It won’t go bad just sitting on a shelf in its box. But that being said, I’d put the new SSD to work right away if I were you.

I recommend replacing the 1TB hard drive in the laptop with the SSD and then convert the hard drive into an external USB drive.

Windows will boot from the SSD in mere seconds, and your programs will load in a flash. In short, replacing your boot drive with the SSD will put your laptop on steroids.

You can then use the much larger hard drive to store your user created files, music and videos.

Alternatively, you could the newly-minted external hard drive to create System Image backups of the files on the SSD (yes, you need to back up an SSD just like you do a hard drive).

Bottom line:  While you can safely store your solid state drive for later use, I think it would serve you better as your new laptop’s boot drive.

Why? Because you can enjoy the greatly enhanced speed of the SSD now instead of waiting till later.

And besides, by the time your hard drive fails, the SSDs on the market at that time will probably so much larger and faster (not to mention cheaper) that you’d likely be tempted to buy a new one instead of installing your “spare” anyway.

Bonus tip: Since your new computer is probably running Windows 10, you might want to check out “Windows 10 for Dummies”, a great book for learning all the “ins-and-outs” of Windows 10!