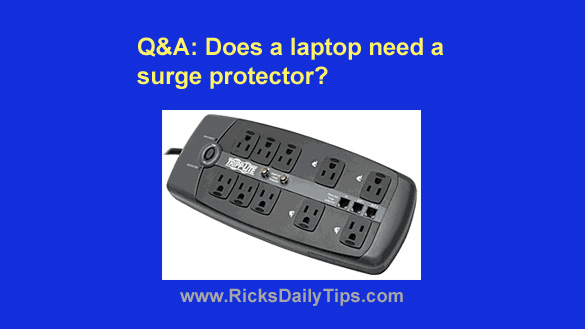 Question from Dale:  I just bought my son a new laptop at Walmart.

As we were walking up to the register to pay, I asked the salesman if he could recommend a good surge protector for it.

That just didn’t sound right to me, but I’m not one to argue.

Was he right or do I need to go ahead and buy a surge protector for my son’s new laptop?

Rick’s answer:  Dale, the power bricks that come with most laptops do provide a modest level of surge protection, but only for very minor surges.

A strong surge or lightning strike can easily take out the power brick itself, and the laptop along with it if the surge is strong enough.

As a general rule, anything that plugs into a wall outlet can be destroyed by a power surge or lightning strike. And that even includes surge protectors themselves.

Bottom line:  I strongly recommend that you purchase a quality surge protector for your son’s laptop, especially now that we are into the summer thunderstorm season.

If you take your chances without one your son could end up with a fried power brick, or even worse, a fried laptop.

When you go to pick one out, I recommend getting a surge protector that’s rated for at least 2,000 joules.

That should be plenty strong enough to protect your son’s laptop from all but the most powerful surges or lightning strikes (the more joules the better of course).

Update from Dale:  That’s what I thought Rick. Thanks for clearing it up for me.

Bonus tip: Did you know you can protect every device in your home with one surge protection device? It’s called a whole house surge suppressor and they work extremely well. Click here to learn more.