You are here: Home / Tech News / Protect everything in your home with a ‘Whole House Surge Suppressor’
2.3k
SHARES
ShareTweetSubscribe 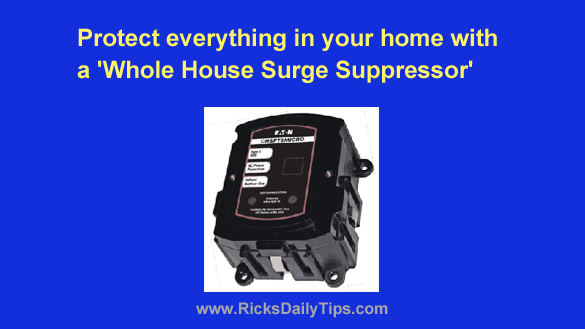 If your home is like most others these days it probably has surge suppressors plugged into the outlets that are powering a sensitive electronic device.

And some homes have one plugged into every outlet.

These portable surge suppressors are fine for protecting your computer equipment, flat panel TVs and other devices from moderate power surges.

However, if your incoming power line gets struck by lightning or a strong power surge you will likely be replacing many of those items the very next day.

And what about your heat pump, microwave, electric range, refrigerator and other major appliances? They all contain sensitive electronic circuits these days, and they typically aren’t protected by surge suppression at all!

The only drawback to installing a whole house surge suppressor is the upfront cost.

While you can pick one up for less than $100 on Amazon you’ll have to pay an electrician to install it either inside or outside your circuit breaker panel (depending on the model).

Realistically, you can expect to pay anywhere from $150-$250 (or more, depending on where you live) to purchase a quality unit and have it installed.

A quality plug-in surge suppressor that will actually provide a decent amount of protection against power surges will cost at least $30, so if you need several of them you’re looking at a fairly major expense anyway.

In fact, a single major power surge can damage the MOV’s (the components that actually protect against surges) rendering your expensive surge suppressors about as effective as a toothless comb.

If the surge suppressors you have in your home right now have been in use through even one lightning-filled summer, they are probably doing little more than giving you a false sense of security. Replacing defective surge suppressors when they need it can result in a major recurring expense.

A quality whole house surge suppressor only needs to be installed once since the MOVs in most of those devices can be replaced when they go bad, resulting in a significant savings over the long term.

And since your entire house will be protected, you won’t have to worry about having to repair or replace your major appliances due to damage from a lightning strike or strong power surge.

Sure, it could happen, but statistics show that homes that are protected by a whole house surge suppressor rarely sustain damage to those items during electrical storms or major power surges.

As you can see, over the long term the purchase and installation of a whole house surge suppressor is virtually guaranteed to save you money. And that’s really the bottom line isn’t it?

Important: The installation of a whole house surge suppressor is a task that is best left to a professional since it requires working inside or around your circuit breaker panel.

Click here to check out the great selection of whole house surge protectors at Amazon.