You are here: Home / Tech News / Are your surge protectors giving you a false sense of security?
2k
SHARES
ShareTweetSubscribe 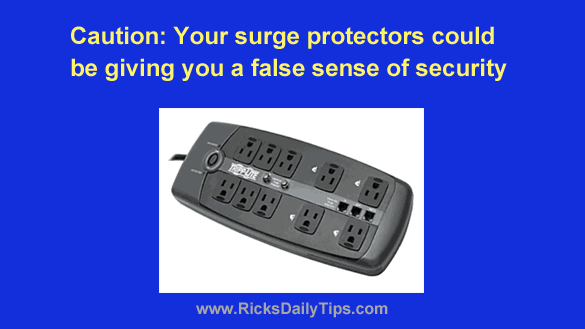 You’re probably aware that lightning and power surges can damage electronic devices such as computers and TV sets.

I’m also guessing that you have your expensive tech gear plugged into surge protectors.

But did you know that surge protectors don’t last forever?

Well, they don’t. In fact, if you live in a region that gets frequent thunder storms or your local power grid is hit with frequent outages and power surges, your surge protectors likely won’t even survive a single storm season.

What’s more, if one or more of your surge suppressors has stopped working correctly, you might not even know it!

Typical consumer grade surge suppressors contain specialized electronic components that detect over-voltage spikes and shunt them to ground. This prevents the devices that are attached to them from being damaged.

The problem is this shunting action actually damages the protective components themselves.

Some devices are equipped with a visual indicator (usually a light of some sort) that will alert you when it has lost the ability to protect your equipment. A lot of them do not however.

Many folks are shocked (no pun intended) when they find out that their computer, TV set or other expensive electronic device has been damaged by a power surge even though the device had been plugged into a surge suppressor when the surge hit.

But unfortunately, it happens all the time.

Bottom line: If you live in a region that gets hit by frequent lightning storms and/or is served by an unreliable power grid, you should seriously consider replacing your surge protectors at the end of each storm season if they don’t have a light that indicates they are working.

I also recommend that you replace any surge protectors that don’t have a status indicator light immediately if a near-by lightning strike knocks out the power to your home.

I recommend always choosing surge suppressors that have a visual indicator to alert you when they lose their effectiveness. And then pay close attention to them!

You can pick up a good quality surge protector at your local electronics retailer or choose from the great selection at Amazon.

Bonus tip: This post explains why even your laptop needs to be plugged into a working surge protector.