You are here: Home / Computer Tips / How to unblock someone you’ve blocked on Facebook
1.3k
SHARES
ShareTweetSubscribe 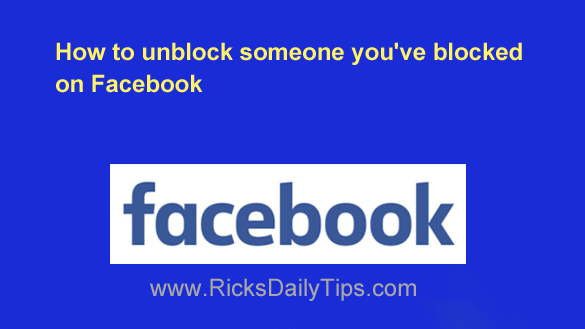 As you well know, Facebook makes it easy to keep in touch with your friends, and even make some new ones.

Unfortunately, every now and then one of your Facebook friends will do something or say something that upsets you.

When that happens you’ll have four choices you can make:

1 – Simply forget about it and hope it never happens again.

2 – Remains friends with the person but unfollow him/her to prevent their future posts from being displayed in your Newsfeed.

3 – Unfriend the person to prevent them from seeing your posts, and vice-versa.

4 – Block the person to sever all ties between the two of you on Facebook.

Blocking someone is what I call the “nuclear option” because it completely severs all ties between your two accounts.

You also won’t be able to contact each other via chat or instant message.

In other words, it’ll be like the two of you no longer exist on Facebook from each other’s perspective. That’s why it’s probably best to consider blocking someone only as a last resort.

But what if you do block someone but later change your mind?

It doesn’t happen all that often, but every now and then I’ll receive a message from someone who wants to unblock someone they had blocked in the past but they can’t figure out how to do it.

While blocking a problem “friend” is easy, unblocking them does require several steps (and you have to know where to look).

Luckily, it’s actually a pretty simple process. Just follow the steps below for the device you’re using to remove someone from your “Blocked” list.

Important caveats: Once you unblock a blocked user Facebook will make you wait 48 hours before you’ll be allowed to block them again if the revived friendship goes south in a hurry.

Be sure to take that into consideration before you unblock someone you consider to be a “problem friend”.

Also, be aware that simply unblocking a person won’t put them back on your Friends List.

If you wish to be friends with them again on Facebook you’ll have to send them a Friend Request (and they’ll have to accept it).

Follow these steps if you use Facebook in a web browser on a laptop or desktop computer:

2 – Click your small profile picture at the far-right end of the menu bar near the top of the window.

7 – In the right-hand pane, click the Edit button in the “Block users” field. You should now see a list of all the people you have blocked on Facebook.

9 – Find the person you want to unblock in the list and click the Unblock button beside their name.

2 – Tap your small profile picture at the far-right end of the top menu bar.

5 – Type the word blocking into the “Search Settings” box at the top of the screen, then tap Blocking after it appears in the list of search results. You should now see a list of all the people you have blocked on Facebook.

6 – Find the person you want to unblock in the list and then tap the Unblock link beside their name.

That’s all there is to unblocking a blocked user on Facebook.