You are here: Home / Tech Questions & Answers / Q&A: Is the fan in my laptop going bad?
840
SHARES
ShareTweetSubscribe 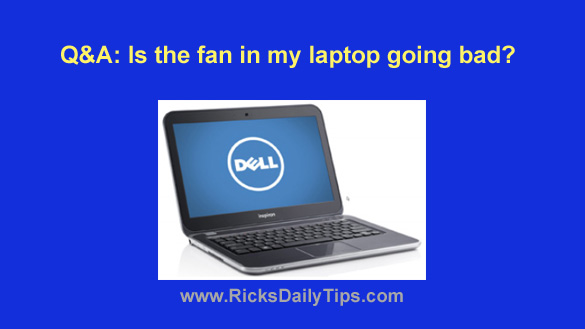 Question from Erica: I have a question about the cooling fan in my Dell laptop.

When I’m using the laptop I rarely hear the fan at all.

However, when my son is playing his games the fan speeds up for several seconds and then slows back down at random times.

It sounds really awful when it speeds up like that.

My question is do I need to have the fan replaced?

I can’t afford to replace the entire computer so I’d like to have the fan in this one replaced if it’s bad before it has a chance to cause additional problems.

Thanks for any advice you can give me.

Rick‘s answer:  You can relax Erica. There’s nothing wrong with your fan. It’s working exactly as it was designed to work.

I’m guessing that you use your laptop for tasks that aren’t all that CPU intensive such as viewing websites, editing Word documents, checking email and other similar everyday tasks.

Your son however is playing games that are most likely stressing your laptop’s hardware a little more than usual, and that causes the CPU to get hotter than normal. That’s why the fan keeps turning on and off while he’s using it.

If you’re concerned about your laptop heating up more than it should, it doesn’t sound to me like it is.

Yes, the fan does start and stop while your son is playing his games, but it’s not at all unusual for a laptop’s fans to even run continuously while playing a CPU intensive game.

Bottom line: I really believe there’s no need for you to worry, but if it would ease your mind the purchase of a laptop cooling pad (#ad) would be cheap “insurance” against premature hardware failure due to overheating.

Bonus tip: If your son is going to be using your laptop for gaming very often you might want to replace its hard drive with an SSD.

Upgrading your laptop with an SSD would make it run both faster and just slightly cooler. The temperature reduction would be very slight but the speed increase would be quite noticeable.