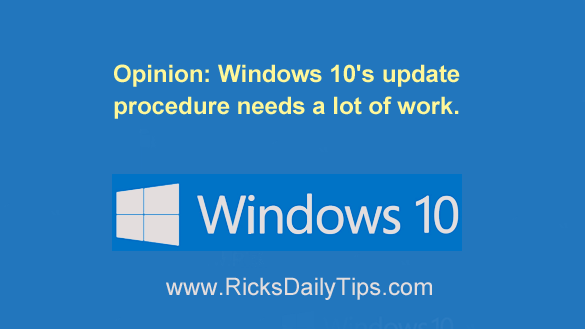 Regular readers of this blog know that I really like Windows 10.

In my opinion, it’s the best version of Windows that Microsoft has ever produced (all things considered).

But that being said, there are a few major annoyances with Windows 10 that sometimes make me question my overall affection for it.

One of those annoyances is Microsoft’s clunky ‘Windows Update’ procedure for Windows 10.

The premise behind the release of regular Windows Updates is a good one in my opinion.

The periodic release of security and feature updates to the core operating system help ensure that Windows 10 remains as secure as possible while also staying competitive with other operating systems.

But there’s a problem: The way Microsoft has designed the update procedure in Windows 10 is absolutely horrible!

First of all, they have made it almost impossible for the average user to delay (or even skip) the installation of certain updates. And yes, that includes updates that Microsoft considers to be non-essential.

While it’s true that there are several ways to delay the installation of a batch of updates for a few days to make sure all the bugs are worked out before the update is downloaded and installed on a machine, the average user would never know how to find them (or even know they exist).

What’s more, even if a user knows how to delay their installation, that delay will usually be short-lived because Windows 10 will eventually figure out a way to “sneak them in” whether the user wants to install them or not. Which brings me to my second point…

Microsoft has made the installation of all available updates more or less mandatory on Windows 10 machines.

Again, there are ways to skip the installation of some “non-essential” updates, but the average user won’t have a clue how to do it because there is no easy and straightforward way to prevent individual updates from being installed with the current batch.

The situation wouldn’t be quite so bad if the installation of new updates worked as it should (flawlessly), but it doesn’t. In fact, failed update installations are actually quite common with Windows 10.

Every time a new batch of updates is released I receive several requests for help because the installation of the updates fails for some reason.

Far too often Windows 10 will go through the process of checking for new updates and attempting to install them only to have the installation abort and error out for some reason.

Worse still, the user isn’t told why the update(s) couldn’t be successfully installed. The only message they receive tells them the update(s) failed to install correctly, leaving it up to the users to figure out what went wrong on their own.

All too often users end up having to take their machines to a computer repair shop and pay someone to install the updates for them.

In my humble opinion, it shouldn’t be this way. If Microsoft is going to make Windows 10 install updates automatically (and force the user to accept them) they need to find a way to ensure that their installation completes successfully.

If a hardware incompatibility ends up being the cause of the failed installation, that update should simply be removed from the batch to allow the others to be installed on the first attempt.

And the user should be given the exact reason why the installation was aborted, not just a generic statement that the update installation failed.

In my mind, it all boils down to this: No user should ever have to take his/her Windows machine to a shop just to get the latest batch of Windows Updates installed.

That being the case, they need to figure out a way to either make them install correctly on the first attempt or just skip the installation of individual problematic updates altogether and explain to the user in plain English exactly why the installation failed.

Bonus tip: I believe modern computers should never crash due to software-related issues. Read this post to find out why.