You are here: Home / Tech Questions & Answers / Q&A: Can lightning still damage something if it’s turned off?
891
SHARES
ShareTweetSubscribe 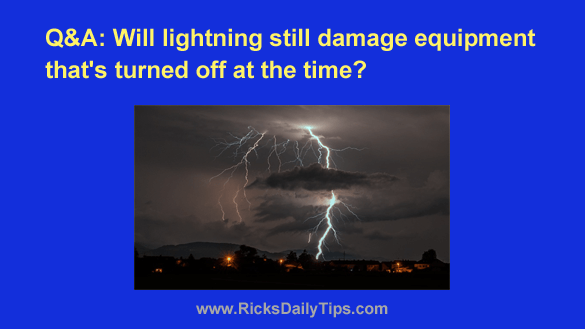 Question from Karen:  I have a question about surge protection after reading one of your recent articles.

If there’s a close lightning strike and your TV or other equipment are not on at the time, will the strike still damage the equipment?

I do not like to turn off my television while I am away from home on vacation as it seems to need a boost from the internet provider when I return after 2 or 3 weeks.

Truth be told, there is absolutely no difference between turning an item off or leaving it on if lightning happens to strike nearby and hit your local power grid.

The power surge from a lightning strike is so powerful that it will jump right over the tiny gap between the contacts in a power switch and destroy the electronic innards of the device.

In a nutshell, that means a lightning strike can (and often will) destroy a device even it’s turned off at the time.

It’s also important to remember that surge protectors themselves can be destroyed by lightning, and they often are.

Surge protectors work by sacrificing themselves in order to (try to) save the devices that are plugged into them.

Whenever a strong surge comes down the line, little gadgets inside the surge protector called MOVs spring into action and attempt to shunt the excess power to ground, thereby preventing the surge from destroying whatever devices are plugged into it.

By and large, surge protectors do a great job. That’s why I strongly recommend their use.

The thing many people don’t realize however is every surge that’s stopped by a surge protector weakens the MOVs a bit, eventually to the point where the device is no longer capable of protecting the devices that are plugged into it.

If a lightning strike takes out a piece of equipment that’s plugged into a surge protector, you can safely assume that the surge protector has been destroyed as well.

I recommend that you replace your surge protectors any time you find out that your house’s electrical system has sustained a direct lightning strike.

Some surge protectors have indicator lights to inform you when they’re no longer capable of protecting your equipment, but those lights aren’t always reliable.

For that reason, it would be a good idea to replace them every couple of years if you happen to live in an area that sees a lot of electrical storm activity, even if they appear to still be working.

Of course if the device’s you’re protecting are quite inexpensive it might well be worth taking a chance on keeping your surge protectors a lot longer. As with everything else, this is simply a matter of weighing the benefits against the potential losses.

Just suffice it to say that even if the device plugged into a surge protector is still working after a lightning strike (which is the goal of using a surge protector in the first place), the surge protector itself is likely damaged and won’t be able to protect the equipment from the next surge (and there definitely will be one at some point).

If you know ahead of time that an electrical storm is coming your way you should definitely unplug every device you can from their electrical outlets, and that includes your surge protectors.

It’s impossible for lightning to damage a device if it isn’t plugged into a wall outlet, with the following exception…

It’s also a good idea to disconnect your TV and modem from the signal cable supplied by your cable TV company (or other provider) as well. Lots of people lose their TVs and modems even if they are unplugged from their electrical outlets when the lightning comes in via the signal cable.

In regards to vacations, if you’re just going to be gone for a long weekend or something like that you can probably get away with leaving your equipment plugged in IF the weatherman is promising there won’t be any storms passing through while you’re away AND if he turns out to be right.

Personally, I never take that chance because I lost almost every electrical item in my houseback in 2008 because an unexpected storm came through while I was gone for the day.

Luckily, my insurance company covered my losses (approximately $6,000 in total), but it was a real a hassle having to replace everything.

If you’re going to be gone longer than a few days (a week for example) you should definitely unplug everything that can possibly be unplugged until you get back.

Of course you can’t really unplug your major appliances, but your smaller items that don’t have to be left plugged in should definitely be unplugged.

Bonus tip: Did you know you can get a device called a “Whole House Surge Protector” that will protect every device in your house? This post has more info on those awesome devices.