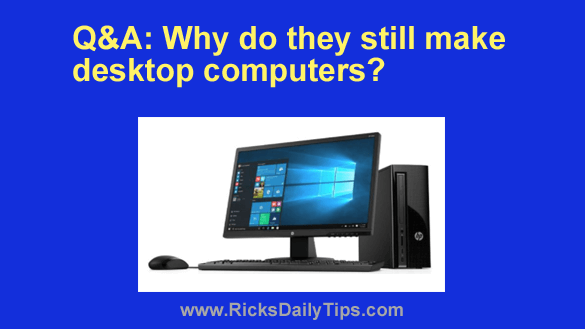 Question from Ben:  Everyone I know that recently bought a computer ended up buying a laptop instead of a desktop computer.

Since no one is buying desktops anymore, why are they still bothering to make them?

Lots of desktop computers are actually still being purchased each and every day!

While it seems that everyone in your personal circle of friends and acquaintances has opted to buy a laptop, there are still plenty of desktop computers being purchased as well.

Yes, it’s true that there are now a lot more laptops being sold than desktops, there are plenty enough desktop PCs being sold to justify their existence in the marketplace. And I fully expect that to be the case well into the future, for these reasons:

This is primarily due to the fact that laptops are necessarily more limited than desktops in regards to cooling capabilities and the amount of space available for housing internal components.

Therefore laptop components tend to be less powerful than their desktop counterparts that fall in the same class and price range.

That makes desktop computers better suited than laptops when higher levels of performance are desired.

2 – Desktop computers are far easier to customize and upgrade than laptops.

When you buy a laptop you’re pretty much stuck with the hardware you purchased.

While you can often upgrade a laptop’s RAM and/or replace its hard drive with an SSD, its virtually certain that you’ll be stuck with the same CPU (and its supporting components) forever.

3 – Desktop computers are a lot easier and more cost-effective to repair than laptops.

The motherboard and other components inside a typical desktop computer can usually be replaced (and even upgraded) when they fail, often for just a fraction of what you’d have to pay for a new computer.

However, if the motherboard in a laptop fails after the machine’s warranty has expired it’ll almost always be more cost-effective to replace the entire laptop than to have it repaired.

3 – Desktop PCs are still quite popular in the corporate world.

Walk into most any large corporate office space and you’ll notice that most of the computers on the desks are desktop machines, not laptops.

That’s changing now with more people either working from home or taking their work home with them, but that change is happening slowly.

Bottom line: Desktop computers are still being sold in quantities that make it worth the manufacturers’ whiles to continue making them. And I don’t expect that to change any time soon.