You are here: Home / Tech Questions & Answers / Q&A: Why are new computers slower than really old ones?
1.1k
SHARES
ShareTweetSubscribe 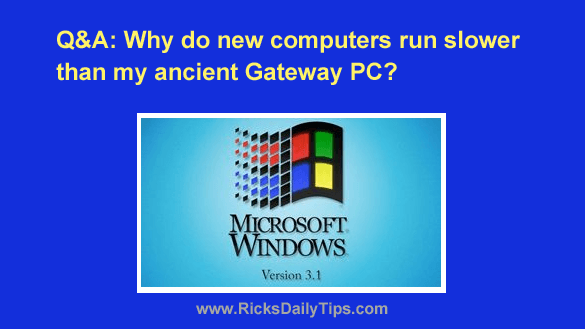 Question from Larry:  I was digging through some junk in my basement and found my old 1990s era Gateway computer with Windows 3.1 on it.

Just out of curiosity I hooked it up and was surprised to see it come on and boot up.

I spent several minutes just fooling around with it and I noticed how fast it was running.

I have a four month old Dell laptop that has an Intel i5 CPU and 8GB of RAM but it seems to run a lot slower than that 20+ year old Gateway.

Why would a modern computer with supposedly much better hardware run slower than a PC that’s over 20 years old? You’d think today’s hardware would be a lot faster than those older machines. Why aren’t they?

In fact, the hardware in your Dell likely runs like a Formula 1 race car compared to that “Flintstones era” Gateway.

Modern CPUs and other modern internal computer components run at much faster clock speeds than their predecessors.

What’s more, they have larger address and data buses, plus multiple processor cores and boatloads of RAM that allow the hardware to run the software that’s on them a LOT faster than older machines.

Truth be told, it’s actually the software running on modern computers that makes them appear to run slow.

Compare that to the early versions of MS-DOS which actually contained less code than a single modern multimedia web page.

Of course Windows 3.1 added a lot of code to a DOS machine’s overhead, but even then the amount of code running on one of those early machines was minuscule compared to what’s running on even the leanest Windows 10 machine.

And that’s before we even load any programs into memory!

And speaking of loading programs, those early Windows machines rarely had more than two or three programs loaded at any given time.

Today’s computers typically have a dozen or more running at all times, each of which is probably several orders of magnitude larger than even the largest DOS/Windows 3.1 program.

Bottom line: While it definitely seems that today’s computers run slower than many of their ancient counterparts, that’s simply a perception instead of reality.

If you were to try to load even one modern Windows program onto an old Windows 3.1 PC (assuming the hardware could even run it, which it can’t), it would choke the machine and bring it right to its knees.

On the other hand, if you could install DOS and Windows 3.1 on your new Dell laptop and run some of your largest old programs everything would run lightning fast.

In fact, those programs would finish their tasks so quickly that it would be virtually instantaneous.

I hope this helps, Larry. Thanks for the awesome question!

Bonus tip: This post offers  a bit of nostalgia about “ancient” rotary-dial telephones. Check it out!