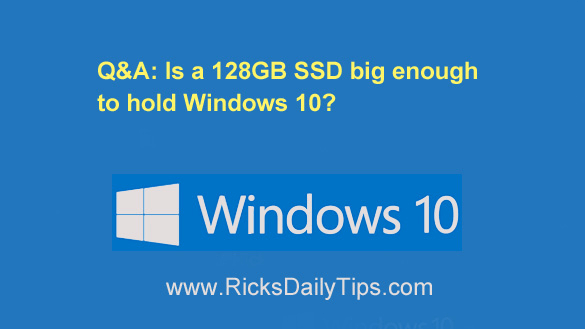 Question from Joseph: I have a 2009 era Dell desktop that’s running Windows 7. The hard drive began acting up a while back so I replaced it with a 128GB SSD.

I’d now like to replace the Windows 7 with Windows 10, but I’ve heard that a 128GB drive isn’t big enough to hold Windows 10.

Will I need to replace the existing SSD with a bigger one before installing Windows 10?

Rick’s answer:  Windows 10 will easily fit on a 128GB SSD, Joseph. According to Microsoft’s official list of hardware requirements for Windows 10 it only requires about 32GB of storage space even for the 64 bit version of that operating system.

Admittedly, Microsoft’s 32GB number is the bare minimum for running Windows 10, but I have it running on a 120GB SSD in one of my work computers and it performs flawlessly.

However, the above being said, you could easily run into problems if your SSD is already close to being filled to the max.

In order to operate efficiently, SSDs need a little “breathing room”. Filling an SSD up to the brim with installed programs and files will degrade system performance quite a bit.

Therefore, I recommend leaving at least 10GB of free space on your 128GB drive (or even more if possible).

If you currently have 42GB or more of free space on your drive and you don’t plan to add additional programs or files, you should be just fine upgrading to Windows 10 without deleting anything or making any hardware changes.

However, if you have less than 42GB available I suggest adding a second drive to your system. That way you can remove all of the programs and user files from the existing SSD and place them on the secondary drive. That will free up plenty of space for installing and running Windows 10.

to choose from at Amazon. At today’s prices I would recommend going with an SSD instead of a hard drive so your programs and files will load as quickly as possible.

Be aware that you’ll probably need a 2.5″ to 3.5″ drive adapter bracket

if you decide to go with an SSD since most desktop PCs from your machine’s era don’t have any open 2.5″ drive bays. If you decide to add a hard drive you can simply choose a 3.5″ drive and skip the adapter bracket.

Note:  Although most don’t, some SSDs come with an adapter bracket included in the package. Check the item description for the SSD you’re interested in buying carefully to see if it comes with one.

And now, after telling you all of the above, I’ll take a moment to tell you about another option…

You didn’t mention what you use this particular PC for, but if you use it primarily for visiting websites, sending and receiving email, watching YouTube videos or engaging with others on social media, you might be better off installing Linux on it instead of Windows 10. Here’s why:

1 – Linux generally runs faster on the same hardware than Windows 10.

3 – Linux machines are much less susceptible to viruses than Windows PCs.

4 – Unlike Windows 10, Linux is absolutely free!

And now, one final recommendation: I strongly recommend that you create a System Image backup of your existing Windows 7 installation just in case something goes wrong during the Windows installation procedure. This post explains how to do that.

Update from Joseph:  I checked and I have about 50GB of space remaining on the SSD but I think I’ll add a 500GB SSD to the system anyway since I plan on installing Photoshop Elements.

And I really appreciate the info about Linux, but I use Photoshop Elements almost every day so I think I’ll go ahead and install Windows 10.

Thanks for your help!!!