You are here: Home / Computer Tips / Give an old PC new life by replacing Windows with Linux
1.5k
SHARES
ShareTweetSubscribe 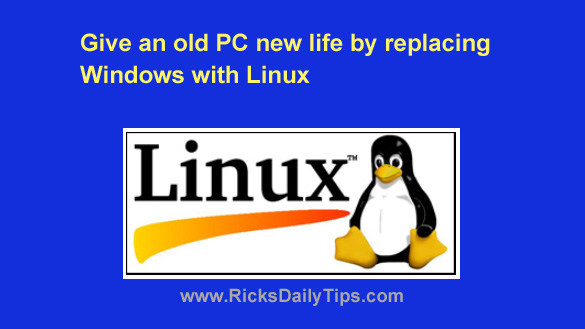 Do you have an older computer that you’re thinking about replacing because it runs too slowly?

Well, there is a much cheaper alternative (it’s free!) for you to consider.

I know how enticing the idea of simply junking it and replacing it with a brand new PC can be, but you might be better off replacing the operating system instead.

If you’re wondering what you should do now that Microsoft has abandoned Windows 7, replacing your Windows 7 installation with Linux is an excellent option.

And if you mainly use your computer for browsing the Internet, sending and receiving email, “Facebooking” and such, it could well be a no-brainer.

Think back to the day you bought that old PC and brought it home. It seemed like a speed demon at the time, didn’t it?

There are a couple of reasons why that same computer seems to run as slow as frozen molasses today:

1 – You might be comparing it to the new computers that you see on display in the stores.

When it comes to computer technology, new and modern is always going to be faster than old and outdated. That’s just a fact of life in today’s fast changing world of technology.

2 – Each and every version of Microsoft Windows naturally slows down over time as the Registry gets clogged up and corrupted and more programs and data files are squeezed onto the hard drive.

And to make matters worse, viruses and spyware can make an already slow system slow down to a crawl.

While there really isn’t anything you can do about #1, taking care of #2 is easy. Replace your Windows installation with Linux!

Think of it like this: Windows is a huge, lumbering behemoth that is quite inefficient at utilizing a computer’s available hardware resources such as CPU clock cycles, RAM and hard drive space.

Linux on the other hand is a lean and extremely efficient operating system that is very resistant to viruses.

All things being equal, almost any computer running Linux will operate faster and be more reliable and secure than the same system running Windows.

Now all of the above being said, there’s a downside to ditching Windows in favor of Linux that you’ll need to consider: There’s a learning curve involved with switching to a completely different platform.

Windows programs typically will not run on a Linux machine, and even the ones that will run using an emulator such as WINE will run slower than they do under native Windows.

That means if you use Photoshop or any other Windows-only application you’ll need to replace it with a Linux equivalent – and that will require learning how to use a brand new program.

But there are exceptions, and there are several very important ones. For example, Microsoft Office is easily replaced with at least two highly regarded Office “clones” that run extremely well under Linux: LibreOffice and OpenOffice.

Luckily, there is very little learning curve involved with using either of the above-mentioned Office clones since they work much like Microsoft Office.

And there is virtually zero learning curve with the Firefox and Chrome browsers.

In fact, once the PC has booted up into Linux and your preferred web browser is loaded into memory, about the only way you’ll notice that you’re using Linux instead of Windows is the speedier performance of the computer!

What’s more, in addition to the above-mentioned software, there are Linux replacements for other popular Windows programs as well.

If you’re planning to replace your old PC anyway there is really no risk to giving Linux a “test drive”.

Who knows, you just might decide you like Linux better than Windows after seeing the way it runs and considering the following advantages:

1 – Unlike Windows, consumer versions of Linux are completely free. Simply download and install the Linux distro of your choice and you’ll be good to go.

2 – Updates are also free, and they (probably) always will be.

3 – The vast majority of Linux applications are free, including the aforementioned Office suites.

4 – Since viruses aren’t really a problem with Linux, you won’t need to install an antivirus program that would slow down your computer.

5 – If you want to take advantage of the speed and security of Linux without giving up your beloved Windows apps, you can set up a “dual-boot” installation where you can choose to boot the PC into either Linux or Windows with a simple “boot menu” selection.

There are a number of Linux “distros” to choose from including the ever-popular Ubuntu.

But if maintaining the familiar Windows “look and feel” is important to you, I strongly recommend that you try Linux Mint!

In fact, if you choose the “Cinnamon” flavor of Linux Mint you’ll feel right at home when you first boot your machine up into Linux!

Older systems with very limited RAM and hard drive space will welcome Puppy with open arms while more capable systems will work very well with either Linux Mint or Ubuntu.

I suggest you start out with Mint first as long as your PC meets or exceeds the minimum hardware requirements, then try some of the “leaner” distros if you would prefer more speed over Mint’s bells and whistles.

Ubuntu, Mint and most other Linux distros can run directly from the “Live CD” or USB flash drive which means you can check them out before making a single change to your hard drive.

Simply download the ISO file and burn it onto a blank CD or flash drive. I know this probably sounds complicated but complete, easy to follow directions are available on the various distro’s websites.

If you like what you see when running Linux from the Live CD or flash drive, installing it onto the hard drive is usually fast and easy. It’s plug-n-play, and in most cases the installation goes off without a hitch. If you do hit a snag, free help is available in the support forums.

So, is Linux right for you? There’s only one way to find out: Download it and give it a try!

I’ve installed a number of Linux distros onto dozens of different laptop and desktop machines, and so far the feedback has been overwhelmingly positive from the owners.

Bottom line: You don’t have to simply “junk” your perfectly fine computer just because it doesn’t run as fast as it used to or even because Microsoft has decided to abandon your version of Windows.

You have an excellent alternative to consider: Ditch your PC’s Windows installation and replace it with Linux!