You are here: Home / Tech Questions & Answers / Q&A: Which version of Linux is most like Windows?
1.1k
SHARES
ShareTweetSubscribe 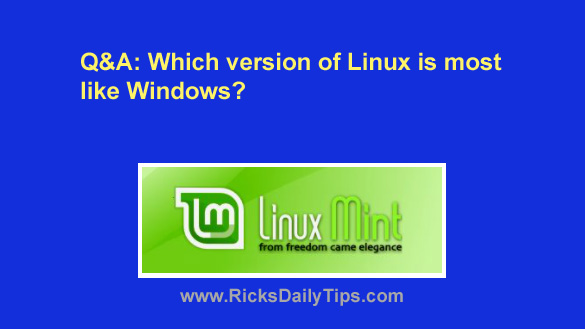 Question from Jules K.:  The hard drive on my fairly old, but awesome Acer laptop died and I bought a 500GB SSD to replace it.

Since I have to reinstall the operating system anyway I’m seriously considering installing Linux on it instead of Windows 7 (I still have the Window 7 CD) since Microsoft is no longer supporting it.

The only thing I use this laptop for is keeping up with several of my favorite websites so I’m not really worried about running any Windows programs on it.

If I decide to forge ahead with Linux I’d really like to install the version that looks and works the most like Windows. Can you tell me which version that is?

Rick’s answer: I think you’re making a good decision Jules, and I think you’ll be happy with your decision to install Linux, especially since Windows 7 is no longer safe to use.

To answer your question, there are several Linux distros that look and work a lot like Windows.

The one I’m currently running on my own Linux PC is Linux Mint with the Cinnamon desktop, and I absolutely love it!

Linux Mint is a very fast and full featured Linux distro that’s based upon Ubuntu. But unlike Unbuntu’s Unity desktop, Mint’s Cinnamon desktop has a LOT in common With Windows 7:

1 – It has a “Menu” button in the same exact place where Windows 7’s “Start” button is located, and it does virtually the same thing.

For example, if you click on it it’ll launch a menu that looks strikingly similar to the “Start Menu” in Windows 7. If you right-click it it’ll display a context menu.

2  – The desktop has a “Computer” icon for accessing the disk drive(s) and the files and folders it contains. It also has a “Trash Can” that works like Windows’ “Recycle Bin”. You can also place program icons and user files on the desktop just like you can on a Windows PC.

Although Linux doesn’t use “drive letters” like the ones Windows users are so familiar with (i.e. C:, D:, etc.) all the drives are listed and you’ll quickly learn how to identify the various drives in the list.

3 – There’s a “Quick Launch” bar that allows you to launch programs with a single mouse click, and it’s in the same exact place as the Quick Launch bar in Windows 7.

4 – There’s a “Notifications” area in the lower-right corner of the screen. And you guessed it – it’s in the same exact place where you find Windows 7’s Notifications area (and of course it works exactly the same way).

5 – When you launch a program it opens in its own window, complete with controls in the top right corner of the window for minimizing the window, making it full screen, or closing it altogether just like the controls in a Windows 7 window.

As you can see, Linux Mint plus the Cinnamon desktop provide a user interface that’s about as close to the one in Windows 7 that you’re likely to find in a Linux installation.

My recommendation is to visit the Linux Mint Website and check out all the details. If you like what you see you can click the download link and download the ISO file and burn it onto a blank optical disk or USB flash drive.

Once you have a Linux Mint DVD or flash drive in hand you can boot your laptop from it and give it a try. You can put Linux Mint through its paces right from the LiveCD/flash drive. There’s no need to install it to the SSD until you’re sure you like it (which I truly believe you will).

If you decide you like it just click the “Install” icon and follow the prompts. In just a few minutes you’ll have a fully functioning Linux laptop that “looks and feels” a LOT like Microsoft Windows!

Bonus tip: This post offers a list of Linux replacements for several popular Windows programs (just in case you find yourself needing one).