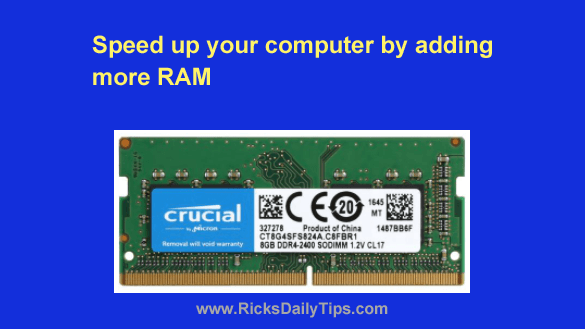 If you’re thinking about spending a few bucks to upgrade your PC you’re probably wondering what to upgrade in order to get  the most bang for the buck.

In most cases, except for adding a solid state drive, adding more RAM will do more to speed up your computer than any other upgrade you can make.  END_OF_DOCUMENT_TOKEN_TO_BE_REPLACED

I have been asked by several friends and acquaintances whether they should upgrade their Windows based PCs to Windows 8, and my answer has been, and continues to be, “NO”. Why? Well, there are several reasons:

While Windows 8 is very similar to Windows 7 under the hood, the Metro-style GUI user interface is quite different and it will definitely take some getting used to. In my opinion there was no valid reason for Microsoft to try to make desktop PCs and laptops look and act like tablets, but that’s exactly what they did. And while Windows 8 ships with a few minor improvements over Windows 7, there aren’t enough of them to justify having to learn a new user interface. END_OF_DOCUMENT_TOKEN_TO_BE_REPLACED