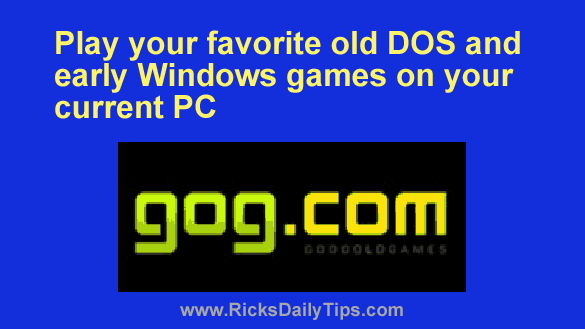 A while back I received an email from a gentleman asking how he could play his stack of vintage DOS games on his Windows 7 laptop.

In my answer I explained how he could download and install a DOS emulator program called DOSBOX that would allow those old games to run under Windows 10.

If you too would like to play vintage computer games on your Windows PC there’s an even easier solution than using DOSBOX.

I recently stumbled across a wonderful website called gog.com (short for “Good Old Games”) which sells hundreds of old DOS and early Windows games that have been ported to run on the latest versions of Windows right out of the virtual box.  END_OF_DOCUMENT_TOKEN_TO_BE_REPLACED