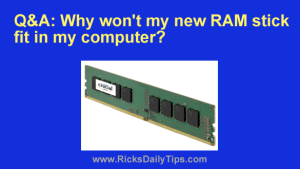 Question from David:  I recently bought a refurbished Dell desktop computer that came with 8GB of RAM installed. I want to double that to 16GB.

I ran the “Crucial System Scanner” you mentioned in this post and it said the machine can use up to 64GB of DDR4-2133 RAM.

I found an 8GB DDR4-2133 RAM stick on Ebay for less than half of what Crucial is selling them for so I bought it. I received the new RAM just 3 days after I ordered it but it won’t fit into one of the empty RAM sockets on the computer.

Do you think the problem is an error in the info I got from the System Scanner? END_OF_DOCUMENT_TOKEN_TO_BE_REPLACED

Question from Eric H.:  I have an older ASUS Essentio CM1630 desktop computer that came with 2GB of RAM.

I scanned the system with Speccy and found out it currently has a single 2GB/DDR3 RAM stick in it.

I want to upgrade the RAM so I bought an 8GB/DDR3 RAM stick and installed it so I can have 10GB total, but I ran into a problem.

What could be the problem? I know this computer is supposed to support up to 16GB of RAM total.

I’m thinking I might have bought a bad RAM stick but I wanted to check with you first in case there’s a BIOS setting or a jumper that needs to be changed.