You are here: Home / Tech Questions & Answers / Q&A: Do you think I should Jailbreak my iPhone?
468
SHARES
ShareTweetSubscribe 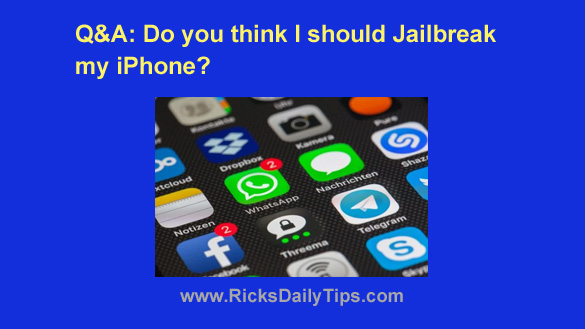 Question from Jamie:  My mom recently bought me my first iPhone. It took me a while to get used to it but now that I have, I really like it.

My question is should I jailbreak it?

I don’t really understand what it means to jailbreak a phone but my brother says I need to do it because it’ll let me install apps that a normal iPhone can’t run.

He said he would do it for me when he comes home on leave (he’s in the Army) but I thought I might be able to do it myself so I searched the Internet for instructions.

While I was looking for instructions I found several articles saying it’s a bad idea to jailbreak a phone.

What’s your opinion about that? Should do it or not?

Rick’s answer:  Jamie, my personal opinion is that you should NOT jailbreak your iPhone.

Before I explain why you shouldn’t do it let me tell you what jailbreaking a device actually does.

Apple has designed iOS (the operating system that controls how iPhones, iPads and other Apple mobile devices work) to be a “closed” system.

The iOS operating system greatly limits what you’re able to do with your phone on a technical level in order to prevent you from accidentally causing serious issues that cannot be fixed without a trip to the Apple store.

This “lockdown” also prevents malware from taking control of your phone and using it to steal your personal information and generally wreaking havoc for you and/or other people.

In short, a locked-down iOS installation only allows you to do things that are considered to be safe (for the most part). And that includes only allowing you to install apps from the official Apple App Store.

Jailbreaking an iOS device removes Apple’s built-in security measures, allowing the user to access the innards of the operating system and install apps that haven’t been subjected to the vetting process that’s required before an app is allowed into the Apple App Store.

When someone who doesn’t have the technical skills required to safely access the innards of iOS is able to do so (i.e. after jailbreaking the device), there’s a strong chance that they’ll end up either causing severe issues with the device or bricking it entirely.

Bottom line: Apple has done a really good job at protecting their iOS devices from malware and accidental damage by limiting the things you can do with your devices (and which apps you’re allowed to install on them).

While you do have the option to remove those protections by jailbreaking your phone, I strongly recommend that you not do it. The few advantages jailbreaking offer are far outweighed by the potential disadvantages in my humble opinion.

That doesn’t mean that jailbreaking is ALWAYS a bad idea. There are folks out there who are intimately familiar with the way iOS works on a technical level and possess the skills necessary to keep a jailbroken device safe from accidental damage and malicious apps.

For those relatively few individuals, jailbreaking is fine. But for the average user it’s a really bad idea.

By the way, a similar procedure called “Rooting” allows Android users to remove the protections that Google has built into their devices as well – and this same warning applies to those users also.

I hope this helps, Jamie. Good luck with your new iPhone!