You are here: Home / Tech Questions & Answers / Q&A: Do I need to scan my Smart TV for viruses?
1.1k
SHARES
ShareTweetSubscribe

Question from Deidre: I have a Smart TV and my mom told me she heard on the news that viruses can infect smart TVs and we need to run virus scans on them.

I didn’t even know a TV could catch a virus.

Is that true? And how do I run a virus scan if it is?

A while back Samsung posted a warning on Twitter that owners of their Smart TVs should scan their TVs for viruses every few weeks. 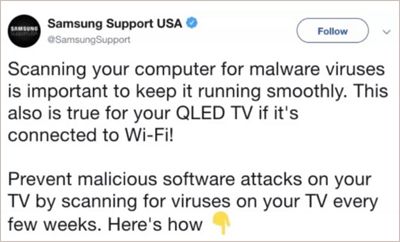 As might be expected, that tweet set off something of a panic among Twitter users who own one of Samsung’s Smart TVs, and many of them responded to the tweet to ask if there was an epidemic of viruses attacking them.

Samsung quickly removed that ill-fated tweet in order to mitigate what was quickly becoming a PR disaster for the company.

So far I’ve seen no reports of a wide-spread viral outbreak with Smart TVs made by Samsung (or any other TV manufacturer for that matter).

Bottom line: While any Smart TV is indeed capable of catching a virus (it’s basically a computer at its core), I really don’t recommend that you run a scan on yours because I’ve seen several reports of virus scans actually bricking the TVs.

At some point in the future the threat of viruses attacking Smart TVs might well increase to the point where it’s worth the risk and trouble to run periodic scans, but I don’t believe we’re at that point right now.

That being said, if you really want to run a virus scan on your Smart TV your TV’s user manual will have instructions for doing so.

Update from Deidre:  Thank you, Rick. That really put my mind at ease.