You are here: Home / Tech Questions & Answers / Q&A: Which version of Linux should I replace Windows with?
433
SHARES
ShareTweetSubscribe 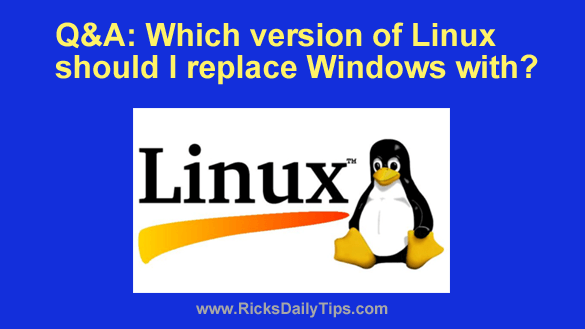 Question from Ed:  I have a Lenovo IdeaPad Z570 laptop that came with Windows 7 preinstalled.

The hard drive died and I had to replace it and my co-worker recommended that I install Linux on it.

The thing is, there are so many Linux versions to choose from that trying to pick one is about to make my head explode.

Which version of Linux do you recommend for a system that was running Windows 7 previously? Thanks for your help.

There are a number of excellent Linux distributions that would serve you well, but I recommend installing the latest version of Linux Mint.

Mint has evolved over time into what I consider to be the most user-friendly (for Windows users) of all the Linux distros that are currently available.

In fact, if you install it with the Cinnamon Desktop you’ll find that it looks and works a lot like Windows 7.

It’s easy to download Mint and burn it onto a blank CD or USB thumb drive, and it’s even easier to install thanks to its awesome plug-and-play installation routine and broad hardware support.

Just be aware that replacing Windows with any flavor of Linux is going to involve a learning curve, and most Windows programs that you used before will need to be replaced with open source (Linux) equivalents. The exceptions are the major web browsers since you can still use Firefox and Chrome.

If you decide to go with Linux Mint with the Cinnamon Desktop you can download the latest version and get plenty of help with its installation right here.

Once you have it installed and running you’ll find an online user guide here.