You are here: Home / Computer Tips / How to protect your computer from lightning strikes during the storm season
1.5k
SHARES
ShareTweetSubscribe 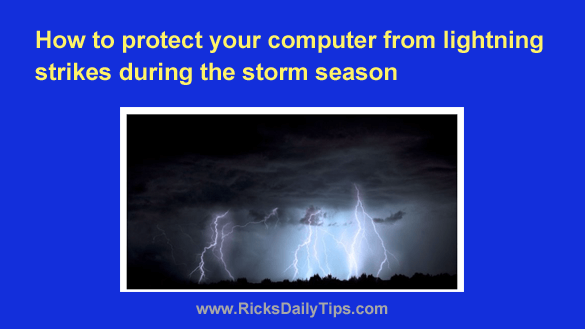 As you probably know, spring is just around the corner.

And as always that means warmer weather and lots of beautiful spring flowers will soon be headed our way as well.

Unfortunately, the arrival of spring also brings with it the risk of severe electrical storms in most areas of the country.

There’s really nothing you can do to keep the storms at bay, but there are several things you can do to ensure that a lightning strike doesn’t damage your expensive computer equipment.

Here are a few tips for protecting your computer from lightning strikes:

1 – Keep your laptop and/or desktop computer plugged into a high quality surge suppressor or battery backup device that has surge suppression circuitry built into it.

Alternatively, you can protect your entire home from lightning and power surges by installing an inexpensive whole house surge suppressor.

Surge suppressors and battery backup devices are your first line of defense against lightning strikes and power surges. I strongly recommend that you use them!

2 – Make sure every surge suppressor you use is undamaged and working as it should be.

As I explain in this post, surge protectors sustain some damage every time they protect your equipment from a lightning strike or other type of strong power surge.

Over time their protective components will break down and fail to protect your equipment from future lightning strikes and power surges.

Many surge protectors have indicator lights to warn you when they’re no longer protecting your gear. Pay attention to those warning lights and replace a non-functional surge protector as soon as possible.

3 – Connect your computer to your network and the Internet via Wi-Fi instead of a wired Ethernet connection if at all possible.

Connecting your computer via wired Ethernet makes it vulnerable to any lightning strike that comes into your home over your cable TV or DSL phone cables.

I’ve seen several modems and routers get struck by lightning and take out every device that was hard-wired to them in one fell swoop.

That won’t happen to you if your computer is connected via Wi-Fi because power surges can’t be transmitted from device to device over a wireless Wi-Fi connection.

These adapters are extremely easy to use and they only cost a few bucks.

4 – If the weather report is calling for the possibility of thunderstorms in your area, unplug your computer and other electronic devices before you leave your house to run errands or take a trip.

And yes, you should also unplug your surge protectors and battery backup devices from their electrical outlets (be sure to turn them off first) to prevent them from being taken out by a lightning strike.

As I mentioned above, a good surge suppressor or battery backup device is your first line of defense against lightning strikes and strong power surges, but they won’t completely protect your gear if lightning happens to strike the power grid fairly close to your home.

Lightning can’t take out a device that isn’t connected to an electrical outlet. That’s why unplugging your devices is the best protection you can get against lightning and power surges.

Bottom line: You can count on a few electrical storms making their way through your neighborhood during the upcoming storm season, but the steps listed above can help prevent your computer(s) and other expensive electronic devices from being taken out by them!