You are here: Home / Tech Questions & Answers / Q&A: What’s the hotkey for locking the screen in Linux Mint?
677
SHARES
ShareTweetSubscribe 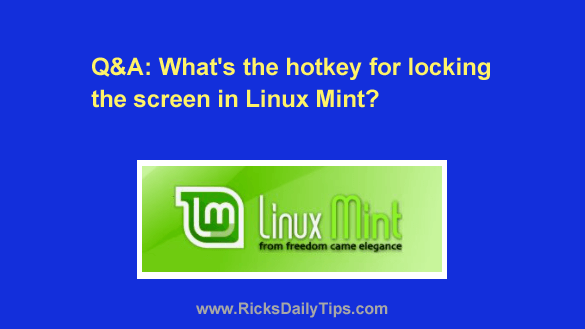 Question from Louis:  I’d been having trouble with Windows 7 on my Acer computer so I went online looking for a solution.

I wasn’t having much luck with my search but then I happened to stumble across your post about replacing Windows with Linux.

Well, it intrigued me, and after thinking about it for a while I held my breath and installed Linux Mint. I chose Mint over the others because you said it works a lot like Windows.

Long story short, after using it a couple of days I’m really glad I made the switch. And you’re right, it really is a lot like Windows 7!

There’s one thing I can’t figure out though. In Windows I could press the “Windows” and “L” keys and the screen would lock, but that doesn’t seem to work in Linux Mint.

I know there has to be a hotkey for locking the screen. Can you tell what it is?

I’ve found that most people do end up being happy with the change, but there are always some who aren’t.

It’s really gratifying to hear from folks who’ve had a positive experience like you have. Thanks so much for the feedback!

To answer your question, indeed there is a hotkey combination for displaying the Lock Screen in Windows Mint…

I know that’s a little different from the familiar Windows+L key combination used in Windows, but it’s pretty close.

It took me a couple of days to get to the point where the new hotkeys seemed like second nature to me, but then I’m sort of set in my ways as my grandmother used to say.

You’ll probably get used to it a lot faster than I did.

Once again, thanks for your feedback on the switch, Louis. Good luck!

Update from Louis:  Thanks so much for the help, Rick. Keep up the great work.