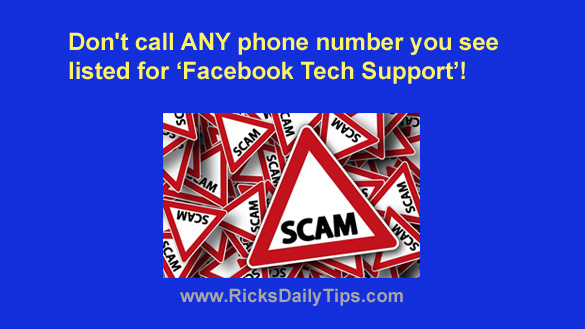 Unfortunately, there are about as many scams on Facebook as there are stars in the sky.

Well, maybe there’s not quite that many but it sure seems like it!

Some scams come and go, never to be seen again. But many others just keep popping up over and over again.

One such recurring scam is the old “Call Facebook Tech Support” scam.

Several of my Facebook friends have recently been scammed into calling what appears to be a phone number to talk to “Facebook Tech Support”.

Unfortunately, there is no Tech Support number for Facebook. That means any phone number you see anywhere on the web (even on the Facebook site itself) that’s labeled something like “Call Facebook Tech Support” is a fake.

Several of these fake numbers are being spread by hackers who use the information you give them when you call those numbers to break into your account and use it to commit nefarious deeds in your name.

Just as bad, they have also been known to provide numbers that result in the caller being charged a sky-high per-minute fee just for placing the call!

Bottom line: Facebook doesn’t provide technical support for regular users via telephone, and you won’t find a number for them listed anywhere in their official “Help” pages.

Therefore, if you see a phone number for “Facebook Tech Support” anywhere on the Internet (including Google) or someone gives it to you in a phone call, email or text message, that phone number is fraudulent. Count on it.