You are here: Home / Tech News / How to accurately evaluate negative reviews on Amazon
528
SHARES
ShareTweetSubscribe 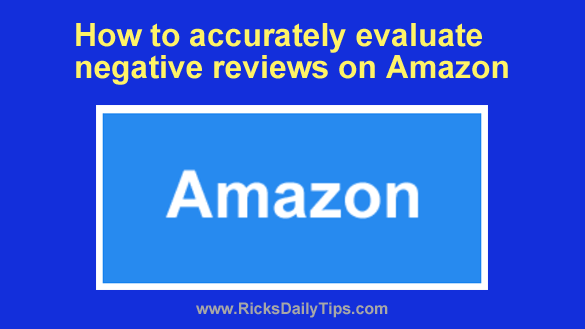 Regular readers of this blog know I frequently recommend various tech products that are available on Amazon for the reasons stated in this post.

Every now and then I’ll receive an email from someone that reads something like this:

“You recommended [name of item] yesterday but you apparently neglected to read the reviews. A bunch of them are really bad!“

And yes, sure enough there will usually be some negative reviews for that item. After all, any item is subject to receiving negative reviews, regardless of its overall quality level.

And yes, some (or even most) of the negative reviews left for a particular item could well be warranted.

But here’s the thing about negative reviews on Amazon: They often don’t accurately reflect the actual quality of the item, for the following reasons:

1 – Most people who purchase an item don’t leave a review at all if they are happy with it. But you can bet your bottom dollar they’ll leave one if they are dissatisfied (as they rightly should).

In effect, a large number of what would have been positive reviews are never left but virtually every negative review ends up on the site.

As you can see, that gives extra weight to negative reviews in the overall review process.

2 – By default, reviews on Amazon are listed with “Top Reviews” listed first. And how does Amazon determine which reviews are “Top Reviews”?

Although there are other factors in play, it’s primarily based on how many people clicked the “Helpful” button under the review.

And which reviews tend to draw the vast majority of the “Helpful” clicks? The negative ones.

Take the reviews on this lap desk, for example. If you take a look at the user reviews you’ll see that it has a 4.8 out of 5 star rating and it has been reviewed over 3,600 times.

Now take a look at the “Top reviews from the United States” section (which are the reviews that the vast majority of Amazon customers look at).

The third review from the top (as of this writing) is a negative “2 stars out of 5”. Pretty bad, right?

But if you look at the date on the review you’ll see that it was left way back in May of 2019. That’s almost three years ago.

Amazon only displays eight reviews total in the “Top reviews from the United States (or whichever country you live in)” section.

That means a whopping 25% (2 out of 8) of the listed reviews are negative even though only 1% of all the reviews left for this item received 2 stars and only 3% received 3 stars.

Contrast those numbers with the 95% of the total reviews that received either 4 or 5 stars and you can see how those two fairly old negative reviews don’t accurately represent the quality of this item.

For example, I would feel completely comfortable buying an item with 30 negative reviews if 1,000 total reviews had been left for that item.

However, I wouldn’t even consider buying something with 30 negative reviews if it had only been reviewed 100 times in total.

Of course what I said above doesn’t mean negative reviews are useless and should therefore be ignored. Far from it.

Negative reviews can indeed be accurate indicators of the quality of an item if you take the following into consideration:

1 – Are the negative reviews (i.e. 3 stars out of 5 or below) a significant percentage of the amount of total reviews?

For example, the 5% negative reviews out of 3,600 total reviews reflected in the example above is negligible in my opinion.

2 – Are there lots of negative reviews complaining about the same thing?

If so, chances are the reviews are accurate and it might be a good idea to avoid that item.

However, if there are only a handful of negative reviews that tend to be all over the map in regards to the complaints, you can probably safely ignore them.

3 – How recent are the negative reviews?

If an item has received several negative reviews within just the last few months, there could well be something to those complaints.

Bottom line: I will never recommend an item that I don’t fully trust in regards to its quality and value.

If you remember that Amazon’s procedures for evaluating and displaying user reviews gives negative reviews more weight than positive reviews, you should be just fine when deciding which items to purchase and which ones to take a pass on.