You are here: Home / Tech Questions & Answers / Q&A: Should I replace a 4 year old SSD just to be safe?
1.2k
SHARES
ShareTweetSubscribe 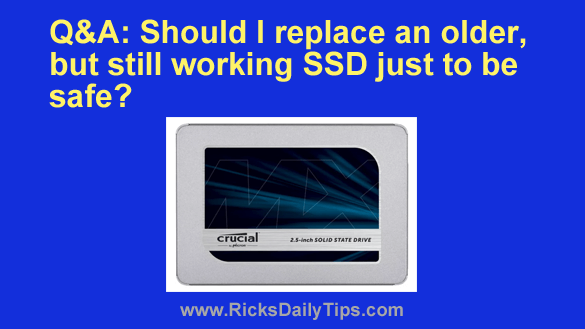 Question from Kendra:  Hi Rick. I really love your blog, especially the section where you answer questions from your readers.

If you don’t mind I’d like to ask a question of my own.

Back in early 2018 the tech guy I used at the time installed a Crucial 250GB SSD in my Dell laptop and it really made it run a lot faster.

I recently read on another site that all SSDs wear out over time because they can only be written to a certain number of times.

That has me sort of worried because this drive is now four years old and I have a lot of personal files on it that I don’t want to lose.

My question is do you think this drive is likely to fail at some time in the near future? If you think it might I’ll go ahead and replace it now rather than taking a chance on losing my files.

Rick’s answer:  Kendra, I’m glad you took the plunge and upgraded your laptop by installing a super-fast SSD. As you discovered they really can drastically speed up most any computer.

I’ll be happy to answer your question about whether you should replace your four year old SSD, but I’d like to address a slightly different issue first…

The fact that you’re concerned about the possibility of losing your irreplaceable files to a drive failure leads me to believe that you haven’t been making regular backups of the data on the drive.

In my humble opinion, that is a huge mistake.

Just like hard drives, solid state drives can fail at any time. In fact, someone I know recently had an SSD die on him less that two weeks after he bought it.

That’s why I strongly recommend that you start creating regular backups of your data right now.

Since you’re using a Windows machine you can easily back up your SSD’s entire contents onto an inexpensive external USB hard drive using Windows’ built-in System Image utility.

Having a recent System Image Backup on hand will ensure that you’ll be able to restore the entire contents of your SSD onto a new drive should the current drive ever fail.

You’ll be back up and running in no time with absolutely no loss of data!

Luckily, System Image Backups are very easy to create. Just follow these instructions for your version of Windows.

Now that we have the issue of backups out of the way, I can properly answer your question…

You asked if I thought you should go ahead and replace your three year old SSD with a new one to safeguard your files. Well, my answer is NO!!!

While your Samsung SSD is indeed getting a little long in the tooth, who knows how long it might last?

Depending on how you use your computer (and how much) that drive could easily last another four years, or even longer. Or of course it could also go belly-up tomorrow.

Truth be told, there’s simply no way to know when it’ll decide that it’s had enough and simply decide to stop working.

The thing is, when your aging SSD actually goes bad on you won’t really matter once you start making regular backups of the data on it.

When the drive finally goes belly up you’ll be able to simply install a new SSD in its place and then restore Windows and all of your programs and files from the backup. Within just a few minutes you’ll be right back where you left off before the old SSD died.

While there are indeed valid reasons for replacing a four year old SSD that’s still working just fine with a newer model (such as needing more storage space), fear of the current drive failing isn’t one of them as long as you have a recent backup on hand.

Bottom line: I strongly recommend that you spend the money you would be spending on a new replacement SSD on a new external USB hard drive instead. You’ll then be able to use that external drive to create your always important System Image backups.