You are here: Home / Tech Questions & Answers / Q&A: How can I find out how much RAM Windows is using?
571
SHARES
ShareTweetSubscribe 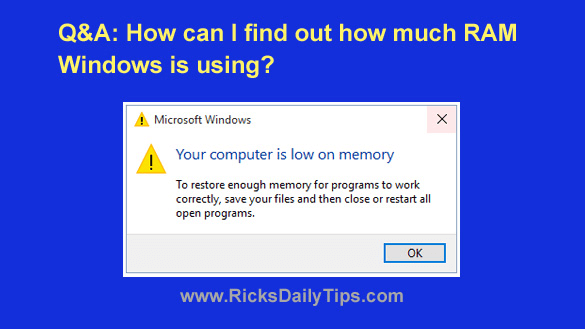 Question from Devon:  I have an HP gaming desktop computer with Windows 10 on it.

I recently started getting a “Your computer is low on memory” warning that pops up on a regular basis.

I always do a fresh restart on the PC when it pops up but the warning comes back after a couple of hours.

This machine has 16GB of RAM in it and I don’t run that many programs at a time so I shouldn’t be getting this warning.

I only get this error if I’m running my Firefox browser, even if there are no other programs running.

How can I find out how much RAM Windows is actually using? Also, do you think I might have a bad RAM stick?

I’ve uninstalled and reinstalled Firefox and all of the extensions three times and the problem is still here. I’m at my wits end.

Rick’s answer: The “Your computer is low on memory” warning is fairly common for Windows users, Devon. It appears whenever the operating system is running low on virtual memory.

Truth be told, there are several possible causes for this message, and it is indeed possible that a bad RAM module could be the culprit.

But that being said, RAM modules are quite reliable these days so it’s most likely a software issue instead of bad RAM.

To answer your first question, you can find out how much RAM Windows is actually using by following the steps below:

1 – Right-click on the Taskbar and select Task Manager from the pop-up menu.

2 – Once the Task Manager is open select the Performance tab.

3 – Click on Memory. You should now see the amount of RAM that’s currently in use listed beside the amount that’s still available for use.

4 – Add the amount of memory that’s in use to the amount that’s available and they should add up to something close to the total amount of RAM that’s installed in your PC.

If the total amount you calculated is far below the amount of installed RAM (say around 50% of what it should be) then one of your RAM sticks could indeed be defective, in which case I recommend that you download and run the MemTest tool mentioned in this archived newsletter issue.

You said this warning only appears when you’re running Firefox but you’ve uninstalled and reinstalled the Firefox program three times. That means the browser itself is probably not causing the problem.

My guess is one of your installed Firefox browser extensions has a bad memory leak which is causing it to gobble up all of your available RAM.

In a nutshell, a memory leak is simply a bug in a piece of software code that prevents the software from freeing up the memory it uses after it no longer needs to use it.

If the amount of RAM that isn’t being released is large it doesn’t take many cycles of the software claiming new RAM for itself and then failing to release it later to gobble up all of your machine’s available RAM.

If a “leaky” Firefox browser extension is indeed causing the problem you should be able to track down the bad extension by following the steps below:

1 – Open Firefox and click the Menu icon in the top-right corner of the browser window (it looks like three horizontal lines stacked atop one another).

2 – Click Add-ons. You should now see a list of all the extensions that are installed on your Firefox browser.

3 – Disable all of the installed extensions that are currently enabled by clicking on the slider button (it should change from blue to gray).

5 – Open Firefox and re-enable the first extension on the list.

6 – Use your computer as you normally do to see if the low memory warning comes back.

If it does, disable that extension and reenable all the other installed extensions, then restart your computer and load Firefox to see if the problem is fixed.

If the warning doesn’t come back then you’ve found the “leaky” extension.

7 – If the warning doesn’t come back with the first extension enabled, disable it and repeat the steps above by reenabling the next extension in the list.

8 – Keep repeating this process until you have identified the “leaky” extension.

Try the things I listed above and let me know how it goes, Devon.

If you’re unable to find the cause of the problem using the troubleshooting process I listed above, let me know and I’ll tell you what to try next.

Update from Devon:  I found the bad extension, Rick. Thank goodness it was the second one on the list.

I have eight extensions that I use and it would have taken forever to find the bad one if it hadn’t been so close to the top of the list.

I removed the bad extension and the problem is now gone. Thanks for your help.