You are here: Home / Computer Tips / Is a picture still worth a thousand words?
721
SHARES
ShareTweetSubscribe 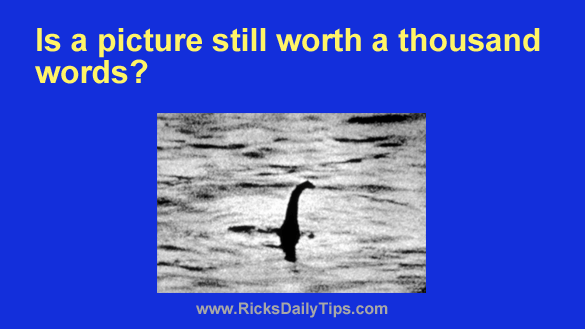 There was a time when photographs were widely considered to be the ultimate “proof” in situations where there was a dispute or disagreement of some kind.

In fact, photos carried such weight that criminals often simply decided to confess to their crimes after being confronted with photographic evidence rather than try to plead their innocence.

But the days when we could confidently take at picture at face value are now long gone thanks to the wide use of Adobe Photoshop and other powerful image editing programs.

A person with strong Photoshop skills can take multiple photographs and combine them into a single composite image that is virtually indistinguishable from the real thing to the naked human eye.

In most cases a forensics expert can determine whether a photo has been faked or doctored, but the average person on the street cannot – and hiring a forensic expert can be quite expensive to say the least.

In times past, fake or doctored images tended to be blurry and/or “shot” from a distance, giving life to the legends of Bigfoot, the Loch Ness Monster and other creatures or events that defy reality.

And in a way, the blurriness sometimes helped lend an air of potential legitimacy to those fake images.

But these days fake photos are vivid, in full color and quite believable.

Be sure to keep this in mind the next time you see a “photo” of a cat riding a motorcycle while juggling seven flaming machetes pop up on Facebook.

Bonus tip: This post offers several tips for taking great portraits without having to invest in a ton of expensive photography gear.