You are here: Home / Tech Questions & Answers / Q&A: What should I do with 168 identical Dell computers running Windows XP?
451
SHARES
ShareTweetSubscribe 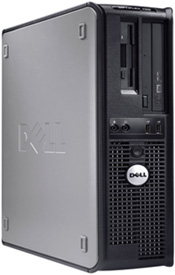 Question from Eddie V.:  The county I live in had a massive auction of surplus items and I ended up buying 168 Dell OptiPlex 755/SDT desktop computers. They all appear to be identically configured with these specs:

I know that older computers aren’t worth a lot these days, but I thought these were worth a bid simply because there were so many of them. I ended up winning the auction and paying $216 for the lot.

My big concern is they might not be worth anything at all since Microsoft has officially killed off Windows XP. What do you think I could do with these computers to make a little bit of money from this deal?

Rick’s answer:  Eddie, I’d say you made out like the proverbial bandit on this deal. What I would do if I were you is install Ubuntu Linux on them in place of Windows XP, then sell them individually as dedicated Internet computers.

I don’t think you’d have a bit of trouble selling them for $50 each, but even if you only get $30 each (assuming they all work), you’d stand to make almost $5,000 after deducting what you paid for them and any fees associated with selling them.

That being said, I seriously doubt that all 168 PCs will be in working order, but you could probably fix many of the non-working ones by pulling good parts from the “bad” ones to fix the rest.

Be prepared to put some serious time into the process of testing the computers, repairing them as needed and then installing Ubuntu on them. But you don’t have to do them all at once.

Good luck Eddie, and congrats on a getting such a great deal!