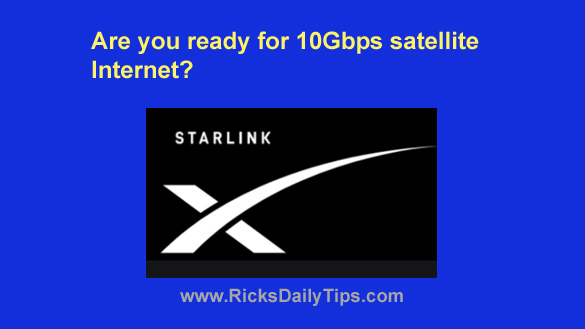 Back in September 2020 I wrote about how SpaceX’s Starlink satellite Internet service would soon be providing 1Gbps download speeds to anyone on planet Earth.

Well, according to this recent notice to the FCC SpaceX has now raised their goal from the first-promised 1Gbps download speed (which itself would be absolutely amazing for satellite Internet) to a mind-boggling 10Gbps!

If you’re old enough to remember the days of dial-up Internet you can surely put that 10Gbps speed into proper perspective.

I’m currently receiving 250Mbps download speeds from Comcast and I absolutely love it compared to the snail-paced Internet of years past.

Starlink Satellite Internet is currently being beta tested in various places around the globe, and so far the results have been quite positive.

If the newly-planned 10Gbps speeds actually come to fruition that will change the entire Internet landscape as cable, DSL and other land-based Internet services scramble to drastically increase their own download speeds in order to stay competitive in the marketplace.

Traditional satellite Internet has a fairly poor reputation, and I have to say it’s well earned.

But that will change altogether once SpaceX rolls the Starlink service out to the masses, even if it’s “only” at the 1Gbps speed they originally promised.

If they can manage to reliably provide 10Gbps we’ll all see our download speeds increase substantially.

And yes, that includes the folks who ultimately decide to stay with their current providers.

Buckle up and strap yourself in because 2021 promises to be a game-changing year in the world of high-speed Internet service.