You are here: Home / Tech News / Need a 100TB SSD? You can get one (for the price of a new car).
838
SHARES
ShareTweetSubscribe 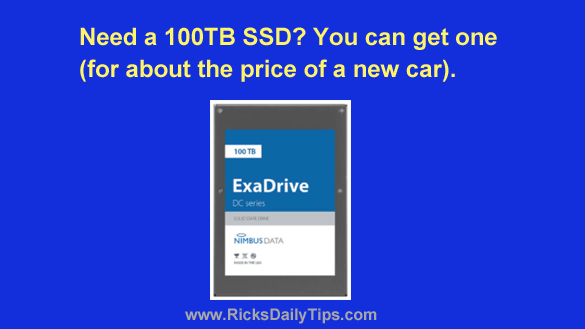 A while back I wrote a post explaining how you can put your computer on steroids by replacing its hard drive with a solid state drive (SSD).

Until fairly recently upgrading to an SSD would have cost you dearly if you wanted to keep (or even increase) your system’s current amount of storage space.

Well, that changed a while back when the prices of many 1TB SSDs dropped to less than a hundred bucks!

SSDs in the 2TB range and up are still relatively expensive compared to hard drives, but I expect that to change as well fairly soon.

SSD manufacturers are now in the process of ramping up the production of large drives and I believe the cost of 2TB SSDs will sink to the same ~$100 level that 1TB models currently sell for in the not so distant future.

Recent developments in flash memory storage are allowing the SSD manufacturers to pack ever more data storage cells into their drives.

As a result, you can now purchase a 100TB SSD if you’re so inclined (IF you have VERY deep pockets).

A company called Nimbus Data has been pushing the envelope on SSD storage capacities for years, and now their line of super-massive drives includes a mind-blowing 100TB SSD!

To put that into perspective, most laptop and desktop computers on the market today come with 1TB hard drives. This massive SSD from Nimbus Data literally holds 100 times that amount!

The Nimbus Data EXADRIVE 100 TB SSD is a 3.5″ drive (the same size as a standard desktop computer hard drive) but it contains several times the storage space you’ll find in even the largest consumer-class hard drives.

This about this for a moment: This is a solid state drive that can hold several times the amount of data you can stuff onto the largest spinning hard drive the average consumer can buy!

However, don’t pull out your credit card and start shopping just yet…

This drive will set you back about what you’d pay for a nice car (40 grand to be exact).

Bottom line: While the 100TB drive mentioned above won’t be finding its way into home computers any time soon, it gives us a good indication of what we can expect in terms of SSD storage size in the not-so-distant future.

In the meantime, you can take advantage of today’s low SSD prices and put your computer into the fast lane right now!