You are here: Home / Tech Questions & Answers / Q&A: Why does Windows 10 use more RAM on my new PC than it did on my old one?
1k
SHARES
ShareTweetSubscribe 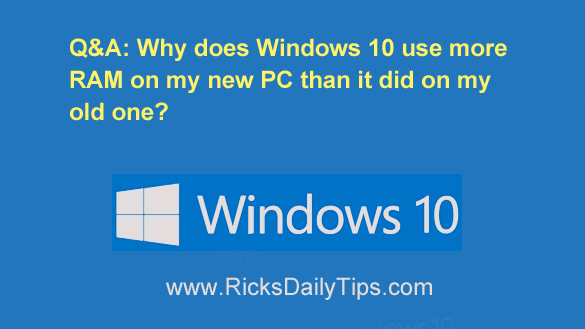 Question from Bill:  I have an Acer desktop PC with 4 GB of RAM that I updated to Windows 10 back when the update was free.

When I have all the programs and browser tabs that I normally use open at the same time the Task Manager says there is approximately 1.2 GB of RAM not being used.

I recently bought a brand new Dell desktop with 8 GB of RAM and Windows 10.

When I have the same exact configuration of programs and browser tabs open on the new machine it says there is still less than 2 GB of RAM that’s not being used.

How can this be? I bought a new computer with more RAM so it would have more breathing room and the memory not be so cramped, but it apparently didn’t help at all.

Can you explain why this is happening and what I need to do to fix it? I hate to think that I might have bought a new computer with more memory only to not see any benefit from it.

Rick’s answer: I can see why this situation could seem a bit puzzling, Bill.

It’s only natural to think that loading the same amount of resources into RAM on a machine that has twice as much RAM installed would leave a lot more unused RAM available for “breathing room”.

However, Windows doesn’t work that way.

Any time the programs and apps you’re using won’t all fit into a computer’s available RAM, Windows will load as much of that information into RAM as it can while leaving a little “breathing room” as you called it.

The remaining portion(s) of those programs and data are then temporarily stored on the system’s hard drive or SSD in a special file called a “PageFile”.

Windows will work on the parts of the programs and data that are currently stored in RAM, then when it needs some of the data that’s stored in the PageFile it will temporarily swap some of the currently unneeded info from RAM to the PageFile and then load the needed data into RAM in the “swapped” data’s place.

The more RAM a PC has, the more data Windows can load into RAM at the same time. That cuts down on the amount of data that must be swapped back and forth between the PageFile and RAM.

Since less swapping means faster system performance, your new computer is actually making great use of that extra 4 GB of RAM!

Regardless of how much RAM a computer has, Windows will always try to keep a certain percentage of the RAM unused to give the system a little “breathing room”.

But as long as the total amount of program code and data being used exceeds the amount of RAM available to store it, part of that data will be temporarily stored in the PageFile until the CPU needs it in order to complete the next task at hand.

That’s why both of your Windows 10 machines are leaving roughly the same amount of RAM unused even though one of them has twice as much RAM to work with.

Bonus tip: This post explains how to make your computer run faster by installing a super-fast SSD as the boot drive.