You are here: Home / Computer Tips / Q&A: What’s the difference between a WiFi Extender and a Mesh Network System?
597
SHARES
ShareTweetSubscribe 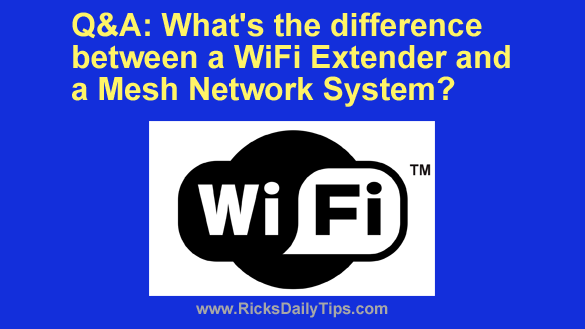 Question from Amanda:  I bought a smart TV for my living room but the WiFi in there is too weak to maintain a solid connection.

There’s enough signal in there for my laptop and tablet to use the Internet with no problem, but it just doesn’t allow the streaming to work as it should.

I’ve been doing some research about ways to boost the signal on that end of the house and I keep seeing the terms “Wi-Fi Extender” and “Mesh Network Systems”.

I’m really confused about these devices. What’s the difference between them and which one should I get?

By the way, money is important, but it’s not the most important thing. I really need to get something that works.

Rick’s answer:  Amanda, both of those types of devices can help provide a stronger WiFi signal to the part(s) of your home where you need it, but they work in very different ways.

I’ll explain the differences between those devices and then recommend the device that I think would work best for you without breaking your budget.

At its core, a WiFi Extender is basically a simple signal booster.

You plug the device into an electrical outlet located somewhere near the middle of your house and it will amplify the WiFi signal it receives at that location and transmit the stronger signal father into the home.

Truth be told, my experiences with regular WiFi extenders haven’t been that great.

First of all, you really need to use a different network name (SSID) than the one you use for your main WiFi network, and that can be a hassle when you move from one area of your home to the next.

For example, if you move from the end of the house containing the router into an area that’s served by the extender you’ll have to manually switch the device from the main network to the extender’s secondary network.

Second, if your device is connecting to WiFi (say after you get home from work), it just might connect to the weaker network instead of the stronger one. When that happens you’ll have to manually switch the device to the stronger network.

And third, WiFi extenders are famous for dropping the signal for no apparent reason.

If you’re using a phone or tablet to check your social media accounts or read your favorite websites, that probably won’t be that big a deal. It’ll either reconnect on its own or you can re-establish the connection manually and just pick up where you left off.

However, if you’re watching a program on your smart TV a dropped signal can be a major pain since the TV will have to re-establish a connection and then buffer the program you’re watching once again.

Mesh network systems are signal boosters as well, but they are typically “smarter” and more powerful than WiFi extenders.

A typical mesh system consists of a source router and additional satellite “nodes” that can be placed in strategic locations inside your home.

These systems always come with at least one satellite node, but that’s usually enough only when the owner has a relatively small home.

A larger home usually requires a second (or even third) satellite node to completely blanket the entire house with a strong and stable WiFi signal.

Based upon the way you described the strength of the existing WiFi signal in your living room, I believe a three-device mesh system (the router and two satellite nodes) should work great for you should you decide to go that route.

Another advantage of a mesh system is your devices always connect to the same network, so there’s no need to switch from one network to another as you move about the house.

And best of all, the WiFi signals provided by a well-placed mesh network tend to be rock-solid.

The only real disadvantage to choosing a mesh network system over a WiFi range extender is the price. You should expect to pay more for the convenience of a stable, single-network mesh WiFi system.

You asked for a specific recommendation, so here it is…

Given your situation as you described it, I believe this two-device mesh network system from TP-Link would be perfect for your home.

Update from Amanda:  I bought the TP-Link package you recommended and it works great. No dropped signals and no buffering. Yay!!