You are here: Home / Computer Tips / Q&A: Why do smartphones no longer come with removable batteries?
763
SHARES
ShareTweetSubscribe 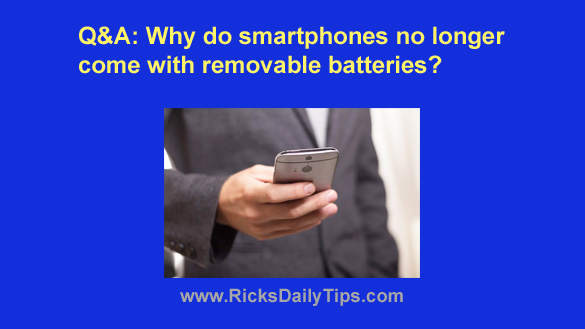 Question from Harris:  The battery in my three year old smartphone won’t hold a charge anymore.

I found a replacement battery online but it said I’ll have to disassemble the phone in order to remove the old battery and replace it with the new one.

The replacement battery comes with the tools needed to install the new battery but the video showing how it’s done has me thinking it’s way beyond my skill level.

After watching that video I decided to just buy a new phone instead.

I’ve been shopping around for a new phone but I can’t find one that has a removeable battery.

Every new phone I looked at has the battery permanently installed inside a sealed case!

Why on earth have they stopped making smartphones with removeable batteries? Surely I’m not the only person who likes being able to replace a battery when it stops working?

Rick’s answer:  Like you, I prefer being able to quickly and easily swap out an old battery for a new one in my devices, Harris.

But unfortunately, smartphones with user-replaceable batteries are quickly becoming a thing of the past.

To answer your question, there are several reasons why the vast majority of new smartphones don’t come with removeable batteries:

1 – Attaching the battery directly to the phone’s circuit board allows the manufacturer to skip the installation of a battery holder.

That means they make a little extra profit on every phone they make because that’s one less part they have to buy.

2 – Skipping the battery holder allows them to make the phone a little thinner and lighter, both of which are appealing to most customers.

3 – Sealing the phone’s case instead of allowing you to remove the back to access the battery holder makes the phone more or less water-proof.

And as you probably know, being waterproof is a major selling point.

4 – When faced with the prospect of either tearing their phone apart or paying a tech to do it for them most folks simply choose to buy a new phone in order to avoid that trouble and expense.

As you probably know, the smartphone manufacturers make a lot more profit when you hand over the cash for an entirely new phone.

And by the way, this semi-forced upgrade scheme works rather well (you and countless others are living proof of that).

That’s it in a nutshell, Harris. Now you know why it’s harder by the day to buy a new smartphone that comes with a removeable battery.