You are here: Home / Tech Questions & Answers / Q&A: Why do people buy Macs when Windows PCs are so much cheaper?
660
SHARES
ShareTweetSubscribe 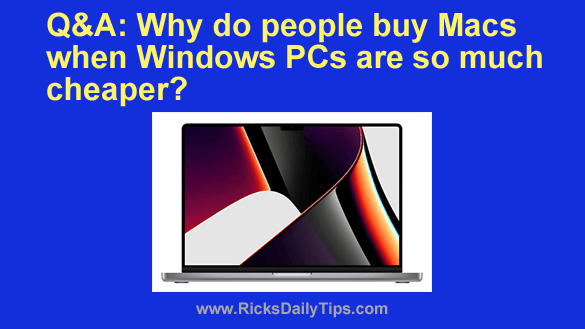 Question from Marla:  My 7 year old HP laptop quit on me the other day so I’ve been shopping around for a new laptop.

My question is why are people willing to pay a huge premium to buy a MacBook when they can get a comparable Windows laptop for so much less?

Rick’s answer:  That’s a great question, Marla. And as it turns out, there are several answers, not just one.

Here’s a list of the most common reasons why many folks buy Mac computers instead of Windows PCs:

Unlike Windows, new versions of macOS tend to look and operate a lot like previous versions.

Yes, Apple does make changes and enhancements to macOS at times, but the changes are usually relatively subtle.

Someone who last used a Mac five or six years ago can easily start using a new Mac right away without having to learn new ways of doing things.

This is especially true of the various settings available on a Mac.

While certain settings change over time and new settings are added, the changes to the menus are so minor that the user will usually know exactly where to look for a setting they’re interested in tweaking.

Compare that to Microsoft’s habit of moving important settings to entirely new locations in the operating system and you’ll see what I mean.

2 – Reliability and stability of the hardware and software

Windows runs on an amazing variety of hardware platforms, and it runs better on some of those platforms than it does on others.

Issues with hardware drivers often cause several types of problems for Windows users that Mac users rarely have to deal with.

Unlike in the Windows world, Mac hardware is pretty much standard in the sense that macOS knows what to expect after it’s installed on a machine.

That seamless compatibility between hardware and software makes for a (mostly) issue-free user experience.

As you probably know, Microsoft just can’t seem to get a handle on the Windows update process.

With extremely rare exceptions, that doesn’t happen in the Mac world.

While there are occasional glitches with macOS updates, most of them are relatively minor and they are quickly patched.

And it’s rare indeed that an update goes so far off the rails that the machine won’t even boot up to the desktop.

Apple generally does a much better job at supporting older versions of macOS than Microsoft does with Windows.

Older Mac hardware that’s still in good condition can usually be sold for more than enough to make it worth your while.

Compare that to Windows machines which tend to become virtually worthless in regards to resale value in a relatively short period of time.

Of course you’ll never be able to sell a used Mac for enough to replace it with a new model, or even anywhere near it. But Apple hardware almost always sells for enough to make a good down payment on a new machine.

6 – Smooth and seamless integration with other Apple products and services

Apple has designed their hardware, software and services to work together in a seamless and (mostly) glitch-free environment.

iPhones, iPads, Macs and other Apple devices work perfectly with iCloud and the company’s other services. And Apple’s hardware devices also work extremely well with one another.

Think back to the last TV commercial or print ad you saw for a Mac (or any Apple device for that matter). It looked pretty sharp, didn’t it?

Apple devices of all kinds have an excellent reputation for quality with the public, and that’s always reflected in Apple’s ads and other marketing endeavors.

The old saying “You get what you pay for!” sticks in the minds of consumers, and it tends to carry even more weight with loyal Apple customers.

Well, that pretty much wraps it up. I’m sure there are other reasons why Mac users prefer those machines over Windows PCs, but I believe these are the biggies.

I hope this helps, Marla. Best of luck with whichever laptop you end up purchasing!