You are here: Home / Computer Tips / Why you need a Battery Backup Device: A real-word example
1.6k
SHARES
ShareTweetSubscribe 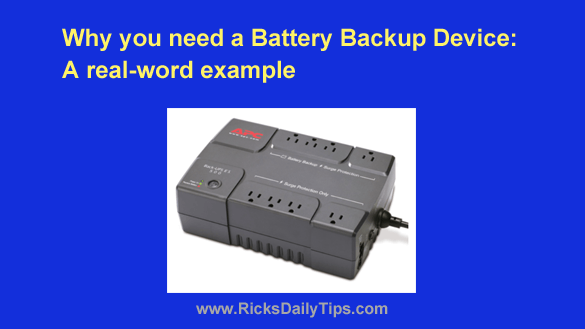 I receive dozens of emails every day from readers of this blog, most of them requesting assistance with computer problems or offering suggestions for posts on the blog.

I also receive quite a few messages offering feedback on one of my posts, and I always appreciate them.

I received a very nice message from a lady named Suzanne, and I’d like to share it with you:

I moved to another state a little over a year ago, and the very first friend I met after I got here told me about your RicksDailyTips website. I’ve been a regular reader ever since.

Several months ago I read a post you had written explaining why every computer needs to be plugged into a battery backup unit. It sounded reasonable to me so I went out and bought three of them. I plugged my Desktop PC and modem into one of them, the monitor and router into another. The third was placed in my bedroom to protect my digital alarm clock, cell phone charger and small” flat screen TV.

Everything was fine until a few days ago when a horrible lightning storm moved through our area. When I got home from work I discovered that my place had been hit hard by a lightning strike. My laptop’s charger as well as my microwave oven and coffee maker were all fried. They had been plugged directly into wall sockets without any surge protection at all.

My 32″ flat screen TV, printer, scanner, and the charger for my Canon DSLR were plugged into regular surge suppressors. I lost all of them.

I just wanted you to know that your advice was both timely and appreciated. Thanks for helping us out with your great tips!

My reply: Thanks for the feedback Suzanne. I’m very glad you find my tips useful!

Even though the other two appear to still be working, it’s a good bet that their surge protection capabilities were either greatly reduced or even wiped out by the lightning strike.

If your house gets struck by lighting again, they probably won’t be capable of protecting your equipment. Better safe than sorry, you know? Thanks again for the feedback!