You are here: Home / Tech Questions & Answers / Q&A: Why does Facebook make you enter your birthdate, but then let you hide it?
1.1k
SHARES
ShareTweetSubscribe 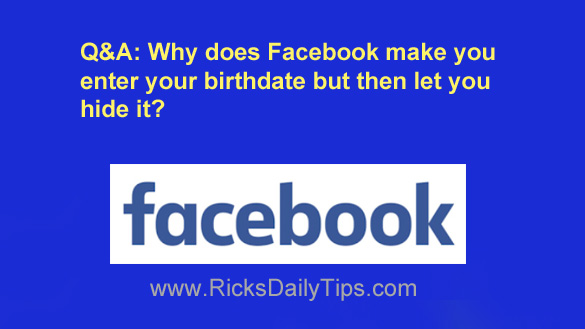 Question from Sheryl:  I just finished helping my sister set up a Facebook account and something about the setup process puzzled me.

One of the things they asked for was her birth date. She didn’t want to enter it but there was no way to skip it.

Since she couldn’t avoid entering a birth date we simply made one up.

Facebook lets you hide your birth date from everyone but yourself so what’s the purpose for them demanding that you enter it in the first place? It makes no sense to me.

Rick’s answer:  That’s a great question, Sheryl. I’ll try to answer it as best I can.

You mentioned that Facebook allows you to hide your birth date from everyone but yourself, and I strongly recommend that everyone do that.

However, even when your birth date is hidden from all other Facebook users, it’s still visible to Facebook for their own internal use.

Although most people don’t like it (myself included), Facebook actually has several valid reasons for requiring every user to enter their birth date:

When choosing the minimum age for qualifying for a Facebook account, the company decided to require that the user be at least 13 years old in order to fully comply with the Children’s Online Privacy Protection Act (COPPA).

Of course there are numerous children on Facebook who entered a fake birth date in order to qualify for opening an account. But by simply asking for the birth date Facebook has covered themselves in regards to the COPPA.

2 – Facebook allows users to designate certain types of content as sensitive in nature, and users under a certain age are blocked from viewing content that’s marked as such.

3 – Facebook earns revenue (and LOTS of it) by selling advertising.

Their massive advertising base includes individual users, companies and corporations of all sizes, celebrities, and even politicians.

To make the ads they sell as productive for the advertisers as possible (and therefore more profitable for Facebook), Facebook allows advertisers to “target” their ads to the group(s) of individuals who are most likely to purchase their products, sign up for their mailing lists, donate to their causes or do whatever it is the advertiser wants the people seeing the ads to do.

And as you probably already know, one of the key demographics that advertisers use is the age range of the group being targeted.

As you can see, Facebook really does have some pretty good reasons for requiring users to enter their birth dates (at least from their perspective).

Of course it’s easy to enter a fake birth date when opening a Facebook account, and many people do.

But other than the children who enter a fake birth date to get around the 13 year old minimum age rule, most people do in fact enter their actual birth dates.

After all, if an advertiser wants to target people between the ages of 30 and 55 it won’t matter if a certain 42 year old user chose a birth date that indicates he/she is 41.

Bottom line: While I agree that it’s irritating and intrusive, Facebook does have legitimate reasons for requiring their users to provide their birth dates.

But that being said, if you chose to enter your real birth date instead of a fake one I strongly recommend that you follow the directions in this post to change its privacy level to Only Me.

That will help you protect yourself from identity thieves and others who would potentially use your sensitive personal info for nefarious purposes.

Bonus tip:  This post explains who you should never mention someone’s age in a birthday greeting on Facebook.