You are here: Home / Tech Questions & Answers / Q&A: Why aren’t the keys on computer keyboards in alphabetical order?
929
SHARES
ShareTweetSubscribe 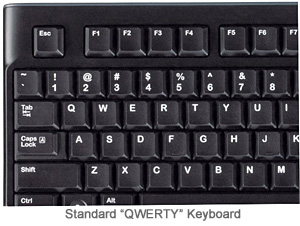 Question from Tina G.:  I was typing up a paper for school the other day when I realized that the keys on my Macbook’s keyboard aren’t in alphabetical order.

I looked at my dad’s laptop and its keyboard has the same weird layout.

I had never really thought about it before, but now I’m curious. Are all computer keyboards layed out this way? And if they are, why?

Rick’s answer:  Tina, the answer to your first question is no, not all computer keyboards are laid out in “QWERTY” fashion like your Macbook and your dad’s laptop keyboards are.

(Note: The term QWERTY was derived from the placement of the five letter keys at the top-left of the keyboard. Check out the photo above and you’ll see what I mean.)

There are actually a number of different keyboard layouts currently in use around the world. If you’re interested, you’ll find a pretty good rundown of the various keyboard layouts on this Wikipedia page.

The above being said, the vast majority of computer keyboards in use today use the same “QWERTY” layout that your Macbook and your dad’s laptop use.

To answer your second question, there’s a story behind why most modern keyboards aren’t laid out in alphabetical order…

The very first typewriters (which of course preceded the first computers by several decades) did in fact have their keys laid out in alphabetical order – and that quickly caused quite a problem.

The alphabetical key sequence made it very easy for folks to learn how to type, and many early typists were able to type so fast that the first mechanical typewriters simply couldn’t keep up, resulting in the numerous little mechanical arms that struck the paper and printed the characters frequently getting jammed.

To fix the jamming issue, the typewriter manufacturers came up with a new non-alphabetical keyboard that was designed to both slow the typist down and physically move the most-used keys away from each other. The result is the QWERTY keyboard that has been in popular use for many decades now.

Long story short, when computer manufacturers designed the first keyboards to use with their machines, they simply carried the old QWERTY typewriter layout over to their new computer keyboards.

Of course modern computers can easily accommodate even the fastest typists without so much as a glitch, but hundreds of millions of people around the globe are now used to the QWERTY layout so I’m guessing it will be the standard for many years to come.

So there you have it Tina. I hope this helps. Good luck!

Bonus tip #1: Read this post to learn how to save lots of time by using a few handy keyboard shortcuts.