You are here: Home / Tech Questions & Answers / Q&A: What does it mean to ‘jailbreak’ an iPhone?
560
SHARES
ShareTweetSubscribe 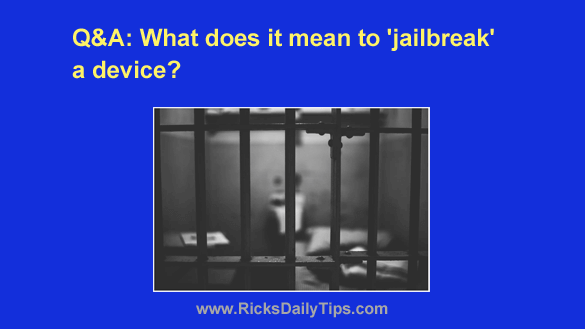 Question from Barbara:  Can you explain what it means to “jailbreak” an iPhone in terms a six year old can understand?

I read something about that the other day and it went right over my head.

Rick’s answer:  I’ll do my best, Barbara. And that’s a great question.

Apple limits the types of apps that can be installed on an iPhone or iPad in order to prevent potentially malicious apps from being installed on your device.

They also locked down some settings and blocked user access to some features of the underlying operating system in order to prevent them from being changed in ways that could render the device vulnerable to hackers.

Those limitations make Apple devices relatively secure against most common types of threats, but they also limit the types of things you can do with the devices and which apps you can run on them.

People generally liken the limitations that Apple has placed on their devices to “placing the devices in jail”.

There are methods you can use to remove the limitations Apple has placed on their devices, thereby “removing them from jail”. Therefore, the process of removing Apple’s limitations from a device has come to be known as “jailbreaking” the device.

Jailbreaking an iOS device really is much like an inmate breaking out of an actual jail.

The escapee loves the feeling of freedom he/she gets once they realize they’ve successfully escaped, but they’re constantly worried about the possibility of getting caught and returned to jail.

And when they are finally caught (as usually happens), the consequences they have to face for the “jailbreak” can be severe, often adding years to their original sentence.

Likewise, jailbreaking an iPhone or iPad typically gives the owner a feeling of freedom similar to that enjoyed by a person who has successfully escaped from a real jail.

They are now free to install any app they wish to install on the jailbroken device with no real limitations, and they can dig deep into the device’s operating system and make any changes they are savvy enough to make.

Installing unauthorized apps and making changes that were previously impossible to make can allow a device to do things and perform in ways that weren’t possible before the jailbreak, some of which are fantastic.

But there’s a serious problem with jailbroken devices…

Once all of Apple’s limitations have been removed from a device the owner can install malicious apps and make changes that leave the device vulnerable to hackers. And unfortunately, many folks who jailbreak their devices eventually end up regretting it.

That’s why I always recommend that folks resist the urge to jailbreak their devices, regardless of how strong that urge might be. In many cases it just doesn’t end well.

By the way, Android users can remove the limitations Google has placed on their devices as well.

In the Android world this process is referred to as “rooting” instead of “jailbreaking”, but the concept, the results and the dangers are pretty much the same.