You are here: Home / Tech Questions & Answers / Q&A: What exactly does it mean to be ‘shadow banned’ on Twitter?
1k
SHARES
ShareTweetSubscribe 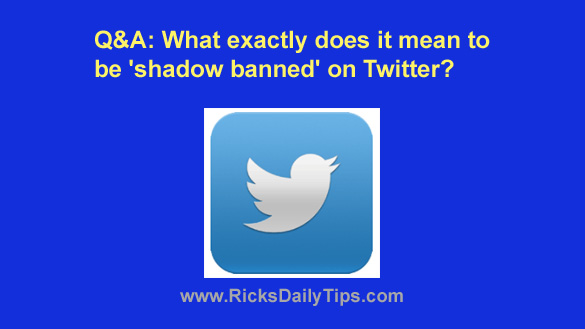 Question from Estelle:  I have a question for you, Rick. I keep hearing about people having their Twitter accounts “shadow banned”.

I don’t know exactly what that means but I’m wondering if maybe my account has been shadow banned.

I used to receive dozens of new followers every day but I’ve only received three over the past two weeks. And hardly anyone likes or re-tweets my tweets anymore. They used to do it all the time.

Can you tell me exactly what shadow banning is? And how can I tell for sure if my account is shadow banned?

Thanks in advance for your help.

Rick’s answer:  Estelle, Twitter has a set of published rules (i.e Terms Of Service) that users must follow in order to keep their accounts in good standing on the platform.

If a user violates one or more of these rules they’ll typically receive a written warning and a short-term suspension of the right to use the feature that Twitter thinks they have abused.

Subsequent infractions can result in the user being permanently banned from using Twitter.

When a shadow ban is in effect the user’s account usually won’t show up in searches and the only people who will see that account’s tweets are the people who are already following the account.

And even their followers won’t see their tweets unless they visit the shadow banned account’s Twitter timeline directly.

Everything will seem to be working just fine from the shadow banned user’s perspective. They can still publish tweets of their own and respond to the tweets of other users.

However, only a small handful of other Twitter users will actually end up seeing the shadow banned user’s tweets and their account won’t show up in a search.

That, in effect, makes it very difficult for that person to grow their account, or even use it in a meaningful way.

By the way, Twitter explicitly denies that they actually shadow ban any users, but then they go on to list in the very same blog post all the things they do to restrict “problem” accounts. And those restrictions look a lot like a shadow ban to me.

Based upon what you said about your account, it does sound like it could well be shadow banned. You can find out for sure by typing your Twitter handle into the search box on this Twitter Shadow Ban test site.

Bottom line: Twitter says they don’t shadow ban users’ accounts, and I guess they can honestly say that since they don’t like using that term.

But the restrictions they place on accounts they see as problematic sure seem to fit that description.

Update from Estelle:  Yep, I’m definitely shadow banned according to the site you recommended.