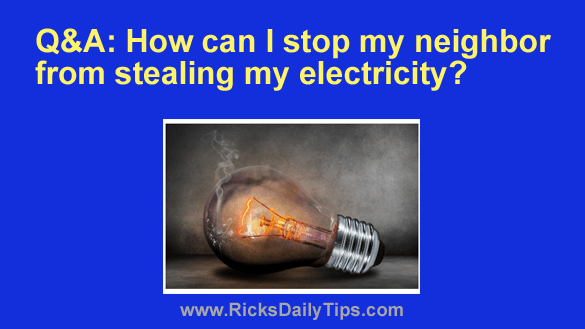 Question from William: I have a detached garage that has a 120 volt electrical outlet that’s accessible from the outside.

On cold nights (which we have lots of here in Wisconsin) my jerk of a neighbor likes to plug his diesel truck’s block heater into that outlet with a long extension cord.

I’ve told him to stop doing this on three different occasions because I don’t like him running up my electric bill.

He’ll stop, but then a few days later he goes right back to doing it.

I’m thinking about temporarily connecting 240 volts to that outlet (which would be very easy to do in the garage’s breaker panel) to destroy his truck’s block heater and teach him a lesson. Do you think that would work?  END_OF_DOCUMENT_TOKEN_TO_BE_REPLACED