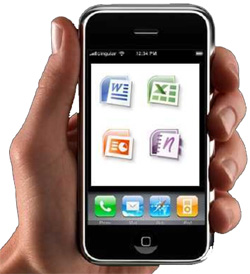 As one would expect, Windows phone users have been able to run Microsoft Office (Word, Excel, Outlook and PowerPoint) on their phones for some time now, but iPhone users who wanted to do the same were left out in the cold. But that has now changed.

Microsoft has just released Office for iPhone, a really nice app that is available for free in the Apple App Store to Office 365 subscribers. Office for iPhone wasn’t intended to be used for creating new Office files on your iPhone, just for editing them, sharing them and syncing them with your Desktop PC.  END_OF_DOCUMENT_TOKEN_TO_BE_REPLACED