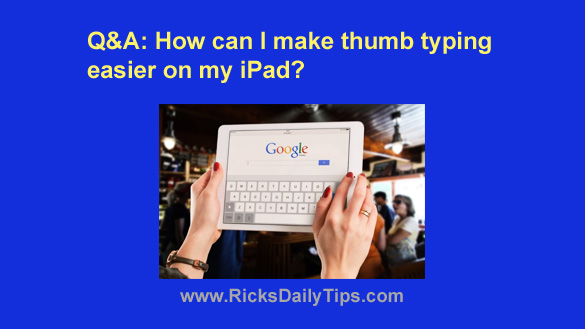 Question from Pauline G.:  I have a question for you Rick.

I’ve been using a 7 inch Android tablet for my Facebooking but the battery recently went bad in it.

Instead of buying another Android tablet I decided to try an iPad so I bought the a 10.2 inch model.

I didn’t know what to expect because I’d never owned anything from Apple before, but I found out that I really love it.

I’m having one problem though. I could hold the 7 inch tablet by its sides and type with my thumbs, but I can’t do that with the larger iPad because the keys are spread out too far.

Do you know if there’s a way to make it easier to type on my new iPad using my thumbs? Maybe by using an app, perhaps?