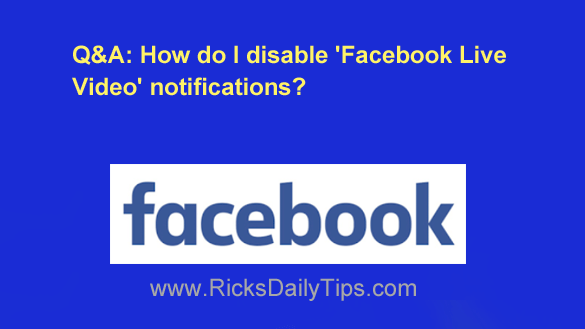 Question from Pete L.:  Several of my Facebook friends use “Facebook Live Video” to broadcast all kinds of stupid stuff.

Personally, I find the invitations to view their videos to be very irritating.

I’ve watched a few of these videos in the pastout of curiosity and I have no desire to ever watch another one.

How can I completely disable Facebook Live Notifications and prevent them from popping up when I’m using Facebook?

Modern smartphones and tablets make it easy to document the world around us by taking photos and capturing video with just a couple of taps on the screen.

We can then easily (and instantly) share those photos and videos with others by posting them on Facebook.

In a nutshell, Facebook Live lets you record live audio and video of virtually any event in real time and share it on your Facebook Timeline so your Facebook friends can witness the event as it unfolds.  END_OF_DOCUMENT_TOKEN_TO_BE_REPLACED